Although his childhood years had been relatively tame, his young adulthood would soon prove to anything but, and this profound love of music would be his sole anchor in a life gone hopelessly awry. In 1982, just shy of his twentieth birthday, E had experienced the death of his brilliant but troubled father, whom E himself barely knew. E has recounted in his memoirs the discovery of his dead father in his bedroom, and the harsh reality of this loss.

Now, hot on the heels of Beautiful Freak and its release, E was dealt yet another devastating blow. His beloved sister and only sibling, Elizabeth, after a lengthy battle with mental illness and substance abuse, committed suicide in 1996. This was not the first of Elizabeth Everettâ€™s suicide attempts; she had been battling schizophrenia, alcoholism, and drug abuse since her teenage years, and had been institutionalized. Her brother had watched helplessly for years as her mental state declined significantly; at one point during a stay in a mental hospital, in which she had been instructed to write â€œI am OKâ€, on a notepad, she dutifully complied, but soon gave up, writing instead, â€œI am NOT OKâ€. 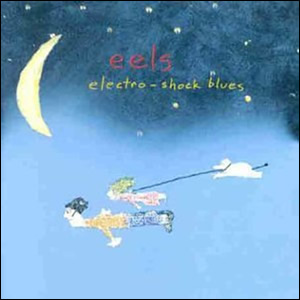 These morbid writings, dark moods, and the misery of mental illness deeply affected E. Following Elizabethâ€™s untimely death, E began pouring both the pain of his sisterâ€™s death and her own mental anguish into his music. Many of the songs on his next album, Electro-shock Blues, are influenced by Elizabeth. The album opens, in fact, with a despondent song called â€œElizabeth on the Bathroom Floor,â€ which recounts a real life incident in which Elizabeth was discovered at home on the bathroom floor following a suicide attempt. â€œAnd I/ I could try/But waking up is harder when you want to die,â€ sings E, softly, attempting to make sense of his siblingâ€™s agony.

The albumâ€™s title track, â€œElectro-shock Bluesâ€, is extremely sparse and haunting. However, it is chilling, beautiful, and remarkably accurate in its portrayal of mental illness and the devastation it causes those who suffer from it. The melody consists mainly of two bleak minor notes on piano, repeated over and over. If the music isnâ€™t chill-inducing enough, the lyrics are even more disconsolate; they speak of Elizabethâ€™s stay in a mental hospital. â€œSkin is crawling off/Mopping the sweaty drops/Sticking around for this shit/Another day/Not another day.â€ For those who have not experienced it, this album, and particularly this song, provide the closest glimpse into the mind of a person helplessly at war within their own mind. It is a terrifying, ice-cold world, suspended precariously between life and death, in which oneâ€™s worst fears become a harsh reality, and nothing is what it seems to be. This bleak, midnight realm is treacherous, frightening, and difficult to describe in words; although E manages very well, he conveys this even better through the use of sound. The desperately morose tone of the piano keys are simple, but highly effective; he lets the music do most of the talking for him.

Mental illness is undoubtedly a major theme of the album. The jazzy, almost comical â€œHospital Food,â€ has a paranoid quality about it: â€œTiptoe through the alley and I tiptoe through your life/But youâ€™ve still got it coming, be it gun or be it knife/â€, and the string heavy â€œMy Descent Into Madnessâ€ can be seen as a kind of companion song, detailing the dreary life within a mental ward.

Death is another primary motif behind Electro-shock Blues. In â€œGoing to Your Funeral, Part Iâ€ E heartbreakingly describes the agony of attending his sisterâ€™s funeral in Hawaii. â€œHonolulu hurricane/I knew that you were not insane, living in the insane world/Smiling like itâ€™s no big deal, scabby wounds that never heal/The beauty was only a girl.â€ It is accompanied by the gorgeous instrumental track, â€œGoing to Your Funeral, Part IIâ€ which is almost deceptively cheery.

Elizabeth Everettâ€™s death is not the only one referenced on this album. Not long after Elizabethâ€™s demise, Eâ€™s mother, Nancy, discovered that she had lung cancer. E attempted desperately to support and care for his mother during her illness and chemotherapy, entrusting her to the care of a team of home health nurses. Towards the end of her life, Nancy became extremely confused and helpless. Watching his own mother, who had raised and nurtured him from childhood, revert to such a pitiful state was undoubtedly agonizing for E. In 1998, Nancy Everett lost her battle with cancer, leaving E the sole remaining member of his immediate family. At 35, E was truly on his own.

In the face of such decimating agony, hope of recovery often seems all but impossible. At such a painful time in his life, the temptation to succumb to his own personal tragedies would doubtless have been overwhelming. There were two options available to E: give in to it and die, or resist and survive. E chose the later, not through medication or therapy, but through music.

Electro-shock Blues, as an album, has many dark elements present. However, it returns to the image conveyed in Beautiful Freak, that of a flower in a hailstorm. During what must have been the most difficult phase of his life, and buried beneath the stress and sorrow of his loved onesâ€™ deaths, E clung valiantly to his hope.

This desperate cheerfulness is seen in songs such as â€œAnt Farmâ€, in which E recounts his fondness for his mother. â€œHate a lot of things, but I love a few things/ And you are one of them/ Nevertheless, itâ€™s all the mess you made/But I can let it go.â€ Another similarly upbeat tune is â€œP.S. You Rock My Worldâ€, which marks a turning point for E; although emotionally battered, he has not been beaten. â€œAnd I was thinking about how/Everyone is dying/Maybe itâ€™s time to live,â€ he sings, resolutely.

Every negative emotion he felt, every painful memory of his sister and parentsâ€™ lives and death, were poured into the album Electro-shock Blues, along with every wish and hope for recovery, and a brighter future. The results were remarkable. The album received great critical acclaim for unabashedly dealing with topics like mental disorders, disease, substance abuse, and death, as well as perseverance, positivity, and an undying sense of hope.

I personally consider Electro-shock Blues to be one of the most powerful, if not the most powerful, album in the Eels discography. It is one of the most personal and deeply affecting albums I have ever heard, shamelessly harsh, and yet intricate, beautiful, and soothing. Mark Everettâ€™s courageous response to his family membersâ€™ deaths can only be commended. Electro-shock Blues is an unforgettable and touching work of art; and, finally, after pouring out most of his heart and soul into this classic album, E was finally able to conquer his demons and move on, into a brighter and more promising world.