Often overlooked as just a subset of The Badlees, this band may have put out one of the finer recordings by a Pennsylvania artist during the first decade of the 21st century. Perfect Smile by The Cellarbirds is excellent through and through. It’s one of those albums that just gets better with each listen. It combines various styles and influences; simple riffs and arrangements like Tom Petty or The Byrds, complex instrumentation and experimentation of later-era Beatles, some contemporary post-grunge and modern punk elements, all along with the Springsteen-esque and smoky Americana vocals of Bret Alexander. Song sequencing is important here, the album constantly morphs along a journey of themes from love and possibilities, to the two sides of expectation, to acceptance, to the breaking point and aftermath and the fresh (or not really so fresh) start. Upon its release in 2001, it was universally acclaimed by critics but could never really catch on with widespread public support. In this sense, it has been the best kept secret of the past couple decades.

Formed in 1998 by guitarist and vocalist Alexander along with bassist Paul Smith and drummer Ron Simasek, The Cellarbirds were all active members of The Badlees. That group were signed to a major label but were facing endless delays in the release of their latest album due to corporate entanglements. The trio developed a live show, distinctly different from The Badlees, and played in between the big band’s tours and recording sessions. When Alexander and Smith opened Saturation Acres Recording Studio in 1999, the trio became the default session band for the studio, backing up many artists on their professional recordings. Finally, by the spring of 2001, The Cellarbirds recorded their first (and to date only) album, Perfect Smile.

Busy with several other projects, Perfect Smile was written and recorded in a hurried and frantic pace. According to Alexander, for 14 straight days the band would show up in the morning with no song and leave in the afternoon with a potential track. In the end, they just picked the 10 best tracks from the group and made a record. This was only possible because the group was such a tight unit live and seasoned at adapting to dynamic situations in the studio. The end result was an accurate reflection of the band’s talent as well as the studio’s production style. “I think Perfect Smile is as good of a touchstone for the Saturation Acres vibe as anything out there,” said Alexander. And that “vibe” involved trying to make versatile songs that could simultaneously entertain a 5 year old with simple hooks and rhythms while still offering substance for a serious adult listener, much like the balance the Beatles so aptly struck.

The opening, title song was written by Alexander in the car on the way to the studio and recorded that very same day. Its theme was inspired by a quote from Bruce Springsteen; “The true challenge of adulthood is maintaining your ideals after you have lost your innocence”. It also contains a really cool lyric (“my heart’s a gnarled tree”) based on the Native American logic that the trees that face the hardest struggle for sunlight ultimately grow to be the strongest. Musically, the song’s backdrop is a consistently strummed 12-string with some nice decor by a Moog synth and an e-bow. It continuously builds from beginning to end and it jumps keys for the climatic third verse, something suggested by drummer Simasek.

“Uncommonly Blue” is heavily influenced by Steve Earle’s “Transcendental Blues” with a lot of retro instruments like the sitar, the accordion, and the mellotron. Lyrically it contains a mish-mash of lines from discarded songs penned by Alexander and co-writer Mike Naydock, a sort of song collage for the verse, with the brilliant “I see beauty in my mind, makes the world seem colorblind” for the chorus hook. All in all the song seems to be about writer’s block giving way to possibilities. An experimental guitar sound introduces “Happy Home”, a song completely built in the studio through trial and error by producers Smith and Alexander, including an extreme, exploding guitar lead that shouldn’t really work but somehow does. The song’s theme is covers anger, cynicism, sarcasm, victimization, and revenge – all the happy stuff to fill the happy home. 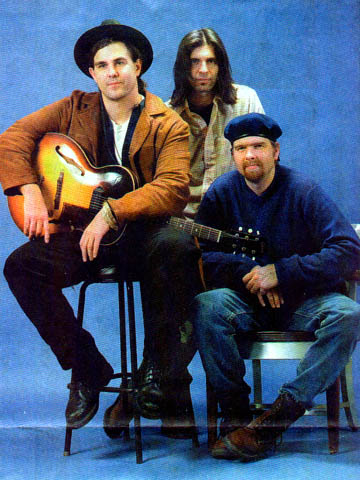 Almost as a counter-point response to the previous song, comes the perfectly Tom Petty-esque “Someone Nice”. Alexander, at the time, described its theme as “nice guys finish last, but be nice anyway” and claims the phrase “you’ve gotta get up off the ground, boy ’cause time won’t wait for you now” as a candidate for his own tombstone. Musically, the rhythm guitar is pure Byrds while the overdubbed guitar is pure George Harrison as it maintains the overall feel of Tom Petty, all resulting in a flowing, lush, folk-rock sound. This was originally developed as a Badlees’ song, but they couldn’t quite get it to work. Thankfully, it got a second life with The Cellarbirds. A smoky room in an off-track betting parlor is the setting for the next track, “Open Ended”, written by Naydock. It is about how getting through some low times can makes the good times all the more enjoyable – “You do for me what hunger does for poetry”. The song contains a slow and spacy guitar and some interesting effects on the vocals in the last verse.

Inspired by the movie American Beauty, “Lester’s Breaking Even” was written on the spot in the studio. A steady, thumping verse rhythm gives way to a grungy chorus hook. Simasek’s percussive excellence really shines through on this one while Alexander doubled up his vocals with octave falsetto harmonies and Smith played a bunch of cello tracks sweeping up a scale for the effect near the end to add true originality to the song. The overall arch of the album kind of changes with this song – Lester’s had enough of trying to be “someone nice”, living in a make-believe “happy home” and looking at the “uncommonly blue” sky of sunny possibilities. No more “perfect smile” for him – he’s taking charge and “breaking even” – marching along to his new freedom from the trappings of trying to keep up with expectations. “Time For Pride” was written pretty quickly from scratch in the studio. It borrows its theme from several artistic sources and contains some cool new-waveish backing vocals by Smith and a lead synth riff which contribute to its overall, early-eighties feel. The melancholy and dramatic ballad “Starting Over Again” contains watery guitars on top of a rather sparse arrangement. Its overall message is about building on experiences, whether positive or negative.

With lead vocals by Paul Smith, “Any Given Day” is a rant on televangelism and hypocrisy – “blessed are the meek and feeble hard up for self-respect, blessed are my five accountants processing the checks.” The song also has a thicker, heavier feel than most of the rest of the album. “You Annoy Me” closes the album with a Ramones-like punk screed that uncovers and exposes false humility. It was co-written by Naydock with the band adding the “come on” bridge section in the studio. This is like a taunt – I have finally have had enough of you so I am going to lay it all out there. The “come on” chorus is like an invitation to give it right back. In the end, the band blows up all the philosophy and depth with a simple, energetic, in-your-face, garage rocker.

After recording was wrapped, the album was mixed by engineer Dave Goodermuth and released to the world. As mentioned earlier, Perfect Smile was less than a raving success commercially but that in no way diminishes its true quality, which is still quite evident decades later.