The mid 1990s marked the rise of Eâ€™s star. After the modest reception of his solo albums, he decided that he would no longer be a one-man show. He quickly assembled a motley group, consisting of himself, as vocalist, bassist Tommy Walter and drummer Jonathan â€œButchâ€ Norton, who would become a permanent member of the Eels family. He also had a new record label; after being dropped by Polydor, E and his newly formed band, Eels, were picked up by the fledgling DreamWorks label. 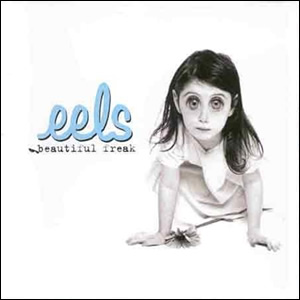 Their first album, Beautiful Freak, was recorded and released in 1996. This album boasted two notable hits, â€œSusanâ€™s Houseâ€ and â€œNovocaine For the Soul.â€ â€œSusanâ€™s House,â€ a spoken-word commentary on the decline of society during a walk through the neighborhood shot to #9 on the UK charts in the spring of 1997, while â€œNovocaineâ€ had already hit #10 on the singles chart only a few months prior, in addition to a 25 week run on the Billboard charts. Already, the Eels were starting to make waves, both on the charts and in the local music scene.

Beautiful Freak is undoubtedly a beautiful album, and every bit as quirky and unpredictable as its title suggests. Besides its two major singles, the album is highly versatile and so relatable that the listener could almost swear that E had written the song for them.

One such song is â€œNot Ready Yetâ€, a mournful tune about recovering from disaster, and a feeling of isolation from the rest of society. â€œI donâ€™t think Iâ€™m ready yet/Iâ€™m not feeling up to it now/Iâ€™m just not that steady yet,â€ E confesses, opting to stay inside and ruminate rather than go outside for a walk. Although this song is positively brooding, it is oddly prescient, in that the songâ€™s slow need for recovery following a trauma would all too soon become an everyday part of Eâ€™s life.

The most beautiful track on the album, and perhaps the most distinctly â€œEâ€ is â€œFlowerâ€, a wistful, tentative creed for the downtrodden. â€œItâ€™s a pretty big world, God, and I am awful small/Everyday they rain down on me, flower in a hailstorm/â€. Eâ€™s vocals on this song complement this gorgeous little song; it is a lovely metaphor, that of a flower in a hailstorm, beaten down, but resilient and hopeful. This, in a nutshell, is E himself; despite rejection and tragedy, he never loses sight of the light at the end of the tunnel. However, the true test of his strength would soon come.