Near the end of 2012, Chris Fetchko launched a custom crowd-funding campaign which offered perks for donations, ranging from exclusive articles and new audio samples to private band concerts and executive producer credits on the forthcoming album. The campaign was a success and the group began recording early in 2013 for a release planned for later in the year. Also, in that Spring of 2013, The Badlees got back on the “big” stage when they opened a string of shows for Bob Seger at arenas in State College and Reading. The band had opened previously for Seger in 1996 and the legendary performer had remembered the band when launching this more recent tour. 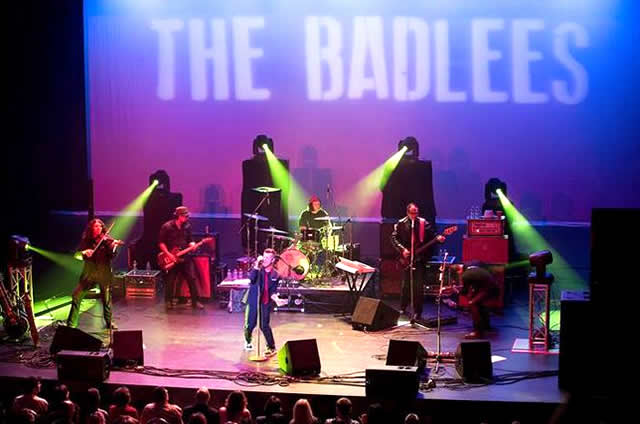 The group played several shows with differing lineups, due to Palladino’s remote location and the type of show venue. In one show in July 2013, the group played a distinctive and unusual set at The Brigg’s Farm Blues Festival that previewed some of the material on the forthcoming album. In preparation of the new album’s upcoming release, the group played a few important shows in Harrisburg, PA. They played a unique rooftop concert on October 3, 2013 before playing at the prestigious Whitaker Center the next night to coincide with the official release of the album.

Epiphones and Empty Rooms, was released in October 2013 and features two distinct discs with the first featuring vocals by Palladino and the second featuring vocals by Alexander. This album is also the first to feature Drevitch and Van Wyk as full members of the band. This album differs from the rest of the Badlees collection on several fronts. Not only is the group’s first and only double-length album, but it also showcases The Badlees fully embracing the “two states” of their group. Beyond featuring separate lead singers on each disc, each was also mixed and mastered through different methods and with different equipment, making the package more like two simultaneous album releases than a traditional double album. Even though tracks on both discs were composed and produced by Alexander and recorded at Saturation Acres, the contrast between the discs is striking. To date, Epiphones and Empty Rooms is the last output of new material by The Badlees.

On the surface, the album’s release and reception seemed to be another great success. However, this album and its segregated sections acted as a catalyst for some internal friction over the musical promotion and presentation moving forward. In early 2014, there were minor negotiations with a few labels, one of which was interested in a re-release of Alexander’s second disc from Epiphones and Empty Rooms. The group had tried creative ways to satisfy everyone’s ambitions while accommodating commitments, but it soon unraveled internally. The Badlees scheduled several shows throughout 2014 with two distinct lineups performing, depending on the show. This arrangement caused confusion among fans and, ultimately, fracture within the group itself. On March 27, 2014, Bret Alexander announced that he was leaving The Badlees, followed by a similar announcement the next day by Paul Smith. Alexander explained his decision by saying;

Sometimes the individuals lose themselves in the process of trying to keep the family together. And then nobody wins.”

Shortly after departing the Badlees’, Alexander and Smith went on to form a new group called Gentleman East, taking the name from Alexander’s 2004 solo album. The pair were joined by Fink and Simasek to form this new rock quartet and Gentleman East soon released their debut EP, Oh Yesterday.

In mid 2014 the two remaining Badlees members, Palladino and Simasek, issued a joint statement that seemed to make the group’s breakup official;

The Badlees have always been greater than the sum of its parts, and therefore, after these shows are done, we will not be performing or recording as ‘The Badlees’ for the foreseeable future. We want to honor the legacy of ‘The Badlees’ and we feel that this is the best way to do that. All of us will still continue to make music outside of the band.” 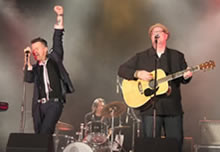 Palladino and Simasek did decide to honor the remainder of their scheduled shows through 2014, employing differing lineups with guest musicians. For a few of these shows Jeff Feletenberger joined the group, performing with the Badlees for the first time in over a decade since he departed the band he founded in 2004. In October 2014 at the Mauch Chunk Opera House in Jim Thorpe, PA, the Badlees played what was expected to be their final live show.

However, the group was not out of the spotlight for long. The Badlees music was featured prominently in the feature film All In Time, co-written and directed by Chris Fetchko. 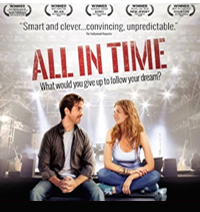 Many plot lines were based on Fetchko’s experience as the Badlees’ manager and All In Time was set in and filmed in the state of Pennsylvania. Further, Pete Palladino and Ron Simasek starred in the film as members of the fictional rock group “The Damsels” as they mirror the respective real-life roles that they play in The Badlees. All In Time was featured at dozens on Film Festivals around the world through 2015 and 2016, winning multiple awards. All In Time made it’s theatrical debut in October 2016 and was critically acclaimed.

Through the second half of the 2010s, the members of the Badlees continued to explore new musical endeavors. Pete Palladino continued to headline shows in PA while remaining in the hospitality business in New Jersey. Palladino and Mike Naydock teamed up to compose new original songs for a project called The Circa 68.

Paul Smith bought the original Susquehanna Sound studio, where the Badlees recorded some of their earliest material, and remolded it into a new state-of-the-art audio and video complex called 8 Days a Week. Alexander continued to produce and create music, releasing several of duo-artist albums, including a 2017 release, Live HMAC and Mauch Chunk Opera House with fellow-former Badlee Nyke Van Wyk. Alexander and Simasek also joined up with yours truly for the studio rock group Sinclair Soul, which has released four studio albums and counting as of 2021.

In December 2020, the Badlees were named as 2021 inductees into the Central PA Music Hall of Fame. The five members of the group during their peak early years – Bret Alexander, Jeff Feltenberger, Pete Palladino, Ron Simasek and Paul Smith – reunited to perform one set during the awards ceremony in Harrisburg, PA on July 1, 2021. This classic lineup returned for more full concerts in March 2022, their first such shows with this lineup in nearly two decades, with a glimmer of hope that there may be more to come.

Now, as the Badlees venture through their 33rd year as a group, this band continues their incredible run where they have done it all musically. As Alexander said in 2010, “In the end, making music and getting people to hear it – that’s all that matters.” On this front, The Badlees have been a rousing success.

Ric Albano is the Editor-in-Chief of Modern Rock Review.
RicAlbano.com