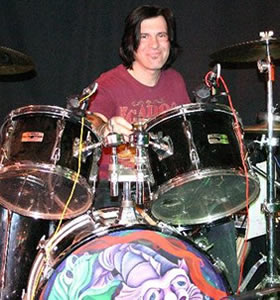 In human anatomy the backbone is the spinal column which is arguably the most important part of the body. It protects the spinal cord which sends messages from the brain to all other parts of the body. Without it communication, walking, and the simple act of picking up a stick and hitting a drum would be impossible. In rock n roll lingo, the “backbone of the band” is often used to describe a drummer who keeps a steady beat so other musicians and singers are free to be more flamboyant and experimental. But when it comes to Ron Simasek, drummer of the Badlees, this term takes on a much deeper meaning.

First of all, Simasek is simply a drummer. He doesn’t sing nor does he compose. He always has and always will be a drummer. He is a first class drummer, keeping time with mechanical precision, no matter which tempo or time signature. When the Badlees were playing simple songs in 4/4 time in the early days, he played simple rhythms. When they branched out to different styles, he played whatever was appropriate in those situations. He has played in packed arenas of 15,000 people and tiny bars sitting behind a single snare. But in each case, his drumming was spot on.

But it is not just musically that Simasek serves as the backbone of The Badlees. As Ron puts it, he learned early on that “musicians are generally a crazy lot” and “you can’t let it get to you”. So, when it appeared that the band was splitting into separate factions around the year 2000, Simasek did not choose sides, he chose to play with “all of the above”. He was a member of The Cellarbirds with Bret Alexander and Paul Smith, while simultaneously playing with the short-lived trio Pete, Jeff, and Ron, which put out a Badlees-eque album 50:45 Live. He later played on Pete Palladino’s solo album The Sweet Siren of the Reconnected, and for Jeff Feltenberger’s “side” band, Echotown, which put out a self-titled album.

When asked about his ability to successfully navigate the treacherous waters of band cohesion Simasek replied, “I just like to hit things.” It is very hard not to admire an answer as simplistic and perfect as that. This stability has also been present in his personal life. Ron is a dedicated father to his sons and has been married to his wife Leann through all the ups and downs of the Badlees’ career.

A more telling answer as to why Simasek is so successful can be looked for, but his own words on the subject say it best. He says, “A lot of people believe that the grass is greener on the other side of the fence. I’m sure that sometimes it is, but I always tried to make the most of the grass which I was given, so to speak. I found that if you stick with your current situation long enough, and nurture it enough, it will grow in ways that you may not expect.” These are wise words for a world in which changing your state is the norm, and sticking with things is now the exception.

This is not to say Simasek is living a dated existence as he is currently the Badlees marketer and tour manager, running their online sites and booking shows. Even with all that on his plate, Simasek still finds time for his favorite hobby, reading. His favorite authors are Tom Robbins and Charles Bukowski.

For someone with so many accomplishments you would think that they would breed a somewhat inflated ego, or at least a drive to constantly out do oneself, but when asked whether he has future ambitions, or unexplored musical desires he replies simply, “No. I’m doing exactly what I wish to be doing.”

J.D. Cook is an author, philosopher, and editor-in-chief of New Pulp Tales.
JeremiahDylanCook.com