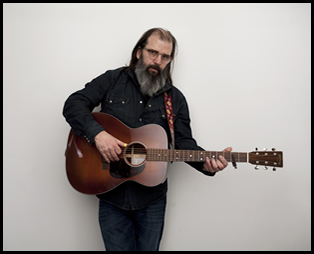 When I heard Steve Earle was coming to the Whitaker Center in Harrisburg, PA, I knew this was something I had to experience. I was excited to get a pair of seats for my husband and I in the front row of the orchestra, just behind the â€œpitâ€ seats in this cozy little theatre in downtown Harrisburg. I proceeded to tell everyone I knew about my great fortune. There were two reactions to my news, â€œSteve who?â€ from most folks and, â€œIsnâ€™t he that lefty, socialist singer?â€ from a few. Since I donâ€™t subscribe to his liberal philosophy and my interest in Steve Earle is based upon his musical skills, I hoped the performance was going to be mainly music but I really didnâ€™t know what to expect.

It was quite a relief when Earle just walked out onto the stage with an acoustic guitar and a harmonica and launched into â€œAngry Young Manâ€ from his 1987 album Exit 0. He barely said two words between songs ripping right into â€œNow Sheâ€™s Goneâ€ and â€œTanneytownâ€œ, only commenting that, â€œAllisonâ€™s not here and so I can wear my hair downâ€, referring to singer Allison Moorer, his wife and sometime collaborator.

Musically, Earle was simply amazing, proving that this artist deserves to be known for more than his political rhetoric. He also displayed a graceful ability to improvise when he snapped the lower E-string during the song â€œAlright Tonightâ€ and he just kept strumming away, minus the low end. After the song he explained; â€œitâ€™s kind of lonely here tonight, just me and Daveâ€ (the roadie). â€œThatâ€™s why we get paid the medium bucks.â€ In fact, for an artist of Steve Earleâ€™s caliber, it was a remarkably intimate and cozy atmosphere. Earle shared the stage only with a single mic and his array of instruments, which included six and twelve string acoustic guitars, a bouzouki, a mandolin, and several harmonicas of various keys. Throughout the night, Earle slowly gravitated to each stringed instrument doing multi-song, mini-sets, while proving his musical mastery on each.

Some of the highlights of the night included â€œTranscendental Bluesâ€, â€œCopperhead Roadâ€, â€œCity of Immigrantsâ€, and â€œTom Ames Prayerâ€, a song that Earle claimed â€œonly a twenty-year-old could write.â€ He also played a trio of fine songs from his latest album, 2011â€™s Grammy-nominated Iâ€™ll Never Get Out of This World Alive. These included the ballad â€œEvery Part of Meâ€, â€œGod Is Godâ€ (a song written for Joan Baez), and the upbeat â€œWaitinâ€™ On a Skyâ€. This last song was the first Earle played on the odd-shaped, 8-string bouzouki and included one of the lighter moments of the evening when he had trouble connecting the instrument and explained â€œthe son of a bitch came disconnected from the motherfucker.â€ Another light moment was when he performed a brand new song slated for an album later this year that went;

But not all the moments on this night were light-hearted. One uncomfortable moment in the performance occurred when he was attempting to organize a sing-a-long to a â€œSteveâ€™s Hammer (for Pete)â€, a tribute to Pete Seeger. Earle made the comment that â€œif you donâ€™t sing a long, everyone will think youâ€™re a Republican, and if you are a Republican, all your friends will know youâ€™re here.â€ The crowd reacted quite lukewarm and the â€œsing-a-longâ€ lacked much participation. During the encore, Earle went on a long litany praising the â€œoccupyâ€ movements while scolding those who did not partake. He tossed in historical figures like Woody Guthrie and Malcolm X, divining how they would react to these times, all while carefully constructing a stream of pretzel logic that in no way blamed the current Obama administration for our present woes. It was the only moment of the night that felt quite uncomfortable and downright phony and was an unfortunate way to finish off a night of great entertainment.

So is Earle primarily a musician or a political activist? On one hand, there is no denying his musicianship, songwriting ability, longevity, and skills as an entertainer. On the other, his attempt to preach social justice and rage against the establishment falls a bit short and makes him a caricature of the icons he is trying to emulate. But the bottom line is, Steve Earle is a true professional when it comes to his craft and his skills as a musician and songwriter make wading through the political ranting worthwhile.

~
Karyn Albano is an editor at DAMES of PA and a regular contributor to Modern Rock Review.