NOTE: This review was originally published at DAMESOfPA.com. 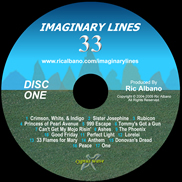 Sometimes you have to admit when something is just too darn big to tackle all at once. Such is the case with reviewing the goliath album Imaginary Lines 33. So this month I begin with disc one of the two disc set, while next week we’ll do disc two.

Imaginary Lines is a studio project created by singer/songwriter Ric Albano. Although the songs are all rooted in piano, they stretch into many diverse rock genres from pop/rock to jazz to progressive. Along with Albano, the album includes some excellent performers such as that by Badlees’ drummer strong>Ron Simasek and guitarist Bret Alexander, Animal Society’s ax man Erik Trabert and M80’s vocalist Janet Rains.

Disc one begins with eight of the new songs not included on either previous album before morphing into the nine tracks that made up the original Imaginary Lines I.

Upon listening to the lead-off song “Crimson, White, & Indigo”, a few things are immediately apparent. First, Albano does not possess great vocal talents, as he tends to “push” out the words more than he actually sings them. This may disappoint those looking for an American Idol-style candidate, but it does actually seem to work with his original material. Further, there is no doubt that, as a composer, Albano takes liberties by “borrowing” from established songs (in the case of this first song, there is great resemblance of The Kinks’ “Tired of Waiting for You”, while even the original masterpiece “Good Friday” starts with a piano similar to Elton John’s “Tiny Dancer”, far short of plagiarism but definite reuse of certain progressions. On the upside, the writing is definitely there – original and entertaining – and the arrangements are, in most cases, masterful.

Together, we get a picture of the simplicity and complexity of Ric Albano’s songwriting side by side, which is something that is echoed in the tune “Princess of Pearl Avenue”. This straight forward rocker is made more complex and interesting by a deviant, unique “middle section” where the whole song is brought down to a droning, whining guitar accented by sharp edged-bass before slowly building back up to the original theme for the final verse.

Of the eight new songs, “Sister Josephine” is one of the more interesting as it deviates from any standard-formula arrangement. The song is, in a sense, upside-down as it builds to a crescendo during the rapped-out first verse, but then parachutes into calmer forms during the more laid back chorus and coda, which really makes the song an interesting listen. It also is the first to touch on a recurring mood in Imaginary Lines, which is that of bittersweet endurance.

“Rubicon” is the album’s only instrumental piece and is beautiful in its majesty and tone. Trabert adds some great ambient guitars on top of Albano’s simple, elegant, moody piano piece. The haunting “Tommy’s Got a Gun” is at once a scolding of and a tribute to author Hunter S. Thompson, who committed suicide while on the phone with his wife. Albano extended co-writing credits with Thompson as he lifts lines directly from Thompson’s suicide note verbatim. This enhances the morbid satire of the song.

The simple but clever “Can’t Get My Mojo Risin'” is a shout in frustration of one’s message falling on deaf ears (or passing clear through live ones) and acts almost as a closing number to a musical. Due to the unique structure of Imaginary Lines 33, the listener is at the end chronologically while barely into the album as a whole sequentially as the section of newest songs morphs into the section of oldest ones. with the combination of “Ashes”/”The Phoenix”, the first of two death/resurrection pairs in this collection.

The contrast in production technique is apparent as the listener returns to Imaginary Lines I, which uses the most richly layered arrangements and effects. You are definitely wading into the deep end of the pool here with the thesaurus-driven “Phoenix” and the impossibly complex, yet simple sounding “Good Friday”. 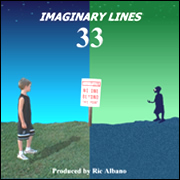 “True beauty lies in the contrast, resting near the far end on the back of a dusty bookshelf in his dusty, one-room academy of infamy” wrote the author but, while in the presence of greatness, it is often hard to see until given the luxury to contemplate and reflect once outside that presence. In this seven and a half minute behemoth of “Good Friday”, the listener is given the luxury of both. By the time you are into the instrumental section that wraps up the song, you are at once relieved it is over and thirsting to hear it again. Ric Albano calls this the longest and greatest song ever written. Obviously, he is mistaken on both points. But if one truly enjoys a multi-dimensional musical journey, then this song in of itself is worth the price of admission.

“33 Flames for Mary” is another gem from the first album. This most straight-forward, melancholy tune is about a man about to hit the stage to receive his well-deserved accolades, only to discover that the concert is already over and the audience has gone home. The fantastic drumming of Simasek and bluesy guitar riffs of Alexander, allows Albano to serve up his poetry at a steady, assembly-line pace.

Then there are also the most philosophical, perhaps political, numbers in the mix late on disc one – the introspective “Anthem” and “Donovan’s Dread”, along with the allegorical “Peace” and “One”, the latter of which was the lynchpin of the original “Imaginary Lines” concept. There is also some cynical, biting satire as showcased in the screed “Perfect Light” and the catchy, show-tuney “Lorelei”. Each of these original Imaginary Lines I>/em> songs carry their own flavor and character, which rewards the audience with each successive listen and the peeling away of each successive layer.

Taken as a whole, disc one is uneven due to its distinctive sections and disparity of time periods and may be a bit exhausting to listen to all at once. But this may be a case where the individual parts far outweigh the sum of the whole.