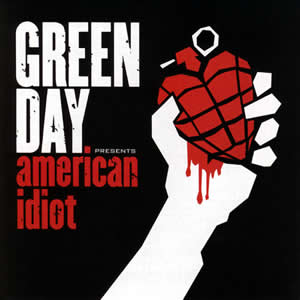 You could not escape American Idiot in 2004. No matter your age, if you were around a radio at any point of that year you heard something from this album. It was particularly well received by teenagers who rallied behind its anti-establishment pop rock sound. The album also came out at a time when the anti-war movement was rising into a fever pitch because of the 2004 Presidential Election. Needless to say, both its creators and those looking to oppose the war didn’t miss any opportunities to use the album as a platform for their views. But climate and circumstance can only carry an album so far, in the end the music is all that matters. American Idiot is filled with well-crafted songs that advance the overall theme while standing strong on their own. With this, the album manages to transcend the politics of its time and stand alone as a modern classic.

Green Day had largely fallen off the public radar prior to American Idiot‘s release in September 2004. They had achieved a great amount of early success with their simple punk-pop sound, highlighted by the tremendous success of their 1994 album Dookie. However, a few sub-par albums like the 2000 folk-influenced album Warning, had diminished their reputation as an iconic punk band.

In 2003, the band began the process of recording their seventh studio album, to be entitled “Cigarettes and Valentines”. However, after recording about 20 tracks, the master tracks for the album were stolen. After consulting with producer Rob Cavallo, the group decided that, rather than re-recording the album they had started, they would start fresh. Beginning with a jam session in their hometown of Oakland, where the three band members each wrote short compositions and linked them together, this gave birth to a rock opera in the vein of The Who’s Tommy, but with a modern punk edge.

The album drops you into the punk rock side of the pool fast with the title track. The lyrics espouse a frustration with the classic suburban way of life. The guitar of Billie Joe Armstrong is fast and fun. The drums rip through the tune with reckless abandon. This is the perfect opening song for an album as it quickly grabs your ear and sucks you in. “Jesus of Suburbia” then throws you headlong into the narrative of the album as it introduces the primary character and rolls through five different sections with sub names. They are all excellent and this is probably the best song on the album and arguably the best song of the first decade of the 2000’s. It constantly progresses into new and interesting sounds and structures as it jams onward.  You really need to listen to it multiple times to grasp and appreciate all the different layers in the song.

After this comes, “Holiday”. This song follows the character “Jesus of Suburbia” as he rebels and escapes his confining home town on a “holiday” though Armstrong has been good about not revealing too much of what he intended the story of the album to be so that it is primarily left open to the listener’s interpretation. The album has some of the most politically charged lyrics as it mocks the idea of war. Following Jesus of Suburbia’s “Holiday” comes his moment at rock bottom.

The way “Holiday” and “Boulevard of Broken Dreams” are situated on the album are reminiscent of a late night spent partying followed by a terrible hangover the next day. This is definitely intentional. The guitar on “Boulevard of Broken Dreams” makes wild use of echoes and feedback as it creates distorted sound, along with bouncy bass by Mike Dirnt. Intermixed with this is a sort of acoustic ballad and a more classic jam. The title also points to the fact that Jesus of Suburbia experiences disillusionment at this point in the album.

This sense of idealistic loss continues into “Are We the Waiting”. This is one of the most relaxed songs on the album relying primarily on a cool chorus of vocals and methodical drums by Tre Cool before the song reaches an abrupt end. The quiet solitude of “Are We the Waiting” is quickly destroyed by the much faster punk anthem, “St. Jimmy”. This is a great song in its own right but much simpler then a lot of the other stuff on the album. It reflects the character of St. Jimmy, who Jesus of Suburbia meets at this point in the album. He’s something of a punk rebel who is more interested in destruction than actual change.

The album’s intensity slows back down with “Give Me Novocain”, which bounces back and forth between a simple acoustic song that you could imagine being played on a beach somewhere and a quick jam. At this point it seems like St. Jimmy is introducing Jesus of Suburbia to some mind numbing drugs personified by the name of the song. “She’s a Rebel” introduces Jesus of Suburbia’s love interest while it consistently rocks throughout. The lyrics conjure up images of many people’s first love and interest in someone who is interesting and a bit bad for us. These themes flow into the next song, “Extraordinary Girl”, which has a wild bongo type of intro before the song adds in a sort of Spanish rock sound. 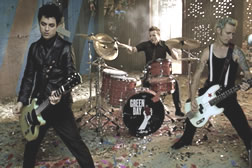 “Letterbomb” is the tenth track of the album and it comes in with guest singer Kathleen Hanna‘s distorted mid-range vocals, as if on the radio. Cool’s drums are outstanding on this album and Armstrong has a great moment where he gets to scream at the top of his lungs but instead of being used in some sort of scream rock capacity it is blended into the song in an interesting fashion. The song ends in a fade out which leads into the album’s most introspective song. “Wake Me Up When September Ends” was acknowledged as being about the death of Armstrong’s father. The lyrics have a true emotional depth to them and the song’s simple picking on the guitar blends well with the more rocky sections of the song. The song was later dedicated to the victims of Hurricane Katrina and played when the Superdome re-opened.

“Homecoming” is the second multi-section song of the album and the contains pieces written and sung by each member of Green Day. The character of Jesus of Suburbia has made a full circle from the opening of the album returning to where he started. It is during this group of songs that the character of St. Jimmy dies. The song is reminiscent of a Christmas Carol in Dirnt’s “Nobody Likes You” as bells chime sound in a manner that implies that Jesus of Suburbia has reached an epiphany before the song moves onto Cool’s ‘Rock and Roll Girlfriend’. The song ends in cinematic style with loud, gong like drums signaling a classic film ending. Except it’s not the end because there is one more gong. “Whatshername” feels a bit odd in that it doesn’t really feel like part of Jesus of Suburbia’s journey. The song seems to take place years after “Homecoming” as Jesus of Suburbia reflects on the love interest from the album. The song is sad in that anyone who ever grew up or just went down a different path than a friend can relate to the sentiment of suddenly wondering what happened to a random person from their life.

So ends our journey into this fantastic work of art. American Idiot can’t be completely discussed in a single review, there are just too many aspects of this album to talk about for them all to be covered. There could probably be a whole article devoted just to the album’s story, another to the musical complexities, and final one dedicated to the lyrics and themes. That is why this album is a modern classic!

Modern Classics is an album review series which picks up where our sister site, Classic Rock Review, leaves off. Here, we examine some of the better albums of the early part of the 21st century on a monthly basis.