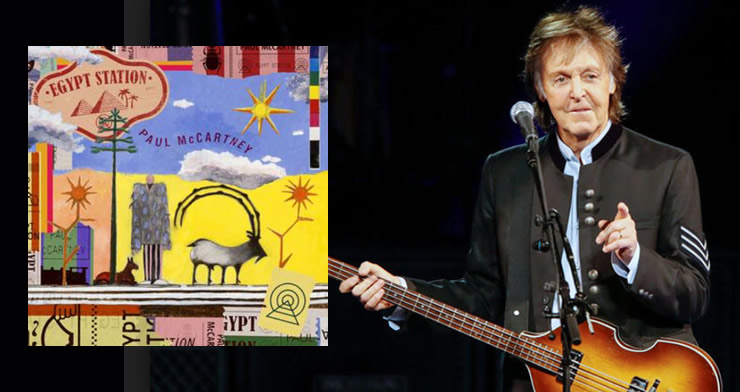 Paul McCartney has released his 17th solo album and today we have a guest review by Scott Erickson, a professional musician from Central Pennsylvania. Please visit Scott’s website for more info.

I’ve listened to Egypt Station a couple of times now, and I’m pretty confident that this is where I stand on the album as a whole. First thing, right off the bat, I want to state that I won’t be talking about his voice. In fact, I think his voice sounds much better here than it does in concert. That’s ALL I need or want to say about his voice.

I’ve never been one to complain if a “legacy artist” like McCartney tries to make a “modern” or “current” sounding record. Truthfully, I admire artists that try to keep their sound fresh, and evolve with the times. Egypt Station does this very well. I have to admit that I love the production. It’s crisp and punchy. It’s well mixed and balanced. The musicianship is fantastic. Paul’s bass playing is still flat-out awe-inspiring. I like the arrangements as well, and none of the tracks go on too long (well, one of them does). But where a lot of Egypt Station falls flat, is with the songs themselves. Most of them are pleasant enough. But there’s nothing on the album that in my opinion, really stands out and belongs in the pantheon of McCartney classics. There are some very good songs here, but there aren’t really any great ones, and there are some clunkers here as well. I think it’s a fair for me to say that this is an album where the good outweighs the bad. But just barely.

Let’s break down the album track-by-track:

01 – “Opening Station” – People have said it’s reminiscent of the opening of “Sgt. Pepper”. I hear it. It doesn’t really do anything to set the mood. It sounds kind of cool. But if anything, it’s a 42 second delayed start to the album.

02 – “I Don’t Know” – The first of 3 singles released in advance of the album. To be honest, this song didn’t make a huge impression on me at first. But, it’s grown on me. It’s got a great melody, and enough musical twists and turns to make it interesting. Now, I think it’s one of the highlights of the album.

03 – “Come On To Me” – The second single. Catchy as the common cold. Killer four-chord riff, pounding drums and seriously thumping bass. This one grabbed me right away as a fun, bouncy, let’s-not-take-ourselves-too-seriously, rocking little track. Certainly nothing profound in its lyrical content (“If you come on to me, will I come on to you?”). But Rock & Roll doesn’t have to be profound, just fun. And that’s what this song is.

04 – “Happy With You” – Paul has never been shy about professing his love for his wives. He’s written songs for Linda, Heather and Nancy. Most of those songs have been great or good. This one isn’t. Lyrically, it’s very simple and saccharine… or dare I say it? “Very twee”.

05 – “Who Cares?” – I’m not going to lie. I really like this one. It’s just a great little rocker, and it says what it needs to say without being trite or cliche’. From a production standpoint, it’s got a very “McCartney II” vibe to it. It sounds like Paul’s playing all the instruments on this one (drums, bass and guitar at the very least), and having fun doing it. This may be my favorite track on the album.

06 – “Fuh You” – The third, and weakest of the singles from the album. It’s not the weakest song on the album, but it’s close. Musically, it starts off reminding me of a knock-off of “Dance Tonight”. Like the rest of the album, I’m digging the production, but I just don’t care for the song itself. The implied F-bombs don’t’ bother me. He’s done that blatantly before (remember “Big Boys Bickering”?). It’s just that this song sounds uninspired. It’s one I’ll most likely be skipping during future listening.

07 – “Confidante” – I really like the backing track here. The dropped “D” tuning and repeated descending note run is cool. Lyrically, it comes off as another typical McCartney love song, until you realize he’s singing about his guitar. To me, that’s what saves this song. It’s a unique twist, on a very often used McCartney theme.

08 – “People Want Peace” – Got to give this one a hard pass. But, if he does this one in concert, it’s got a perfect opportunity for an audience sing-along chant. I think Macca should leave the “Peace and Love” shtick to Ringo. That said, I wouldn’t be surprised if Paul offered this one to him, and Ringo rejected it.

09 – “Hand In Hand” – Another severely weak spot on the album. Nice flute solo. Other than that, it’s pure fluff. Thankfully it’s only 2:35 long. Next!

10 – “Dominoes” – I wasn’t sure about this song at first. But, I find myself liking this one more and more. Some really fantastic chord changes. A great melody, and the lyrics are pretty decent. While I think the backwards guitar towards the end is a little much for the song, I’m sure a lot of acoustic musicians will be covering this one (myself included). Another highlight of the album for sure! 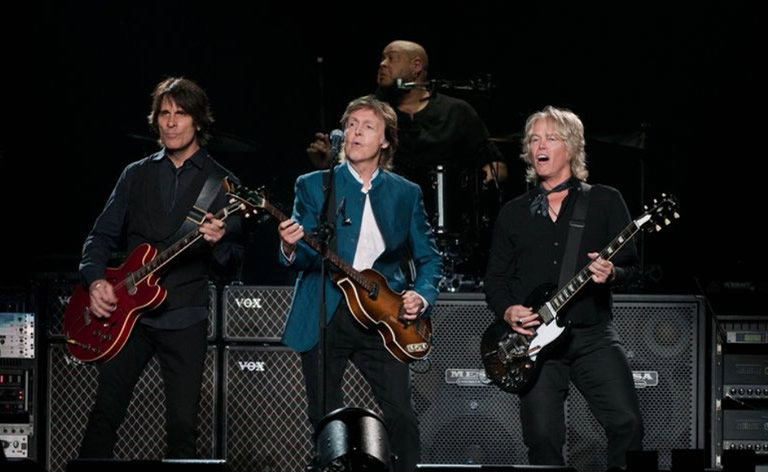 11 – “Back In Brazil” – This one just doesn’t work for me at all. Aside from a great bass line, there’s nothing that pulls me in to this song. On to the next one. What the hell are they chanting in the song? “Ichiban”? (I don’t have the lyrics in front of me) That’s Japanese. It has nothing to do with Brazil. On to the next song…

12 – “Do It Now” – More uninspired lyrics. Some nice vocal layering in sections. But that can’t save this one from being a pretty boring track.

13 – “Caesar Rock” – Another great backing track. A surprising rock vocal performance. It should have been called “She’s A Rock” as originally intended. The acoustic guitar on the verses really remind of me of “Temporary Secretary”. It’s a fun little tune, but still one of the worst sets of lyrics on the album.

14 – “Despite Repeated Warnings” – The first section of the song calls to mind “House Of Wax” from Memory Almost Full, but without the sense of urgency and drama. The second section recalls melodic bits of “Mr. Bellamy” (also from MAF), but really rocks. LOVE the horns in this (as well as the ones in “Come On To Me”) The political statement the song makes are not subtle, but they’re also not terribly in-your-face either. I wasn’t crazy about this one on first listen. It goes on about 2 minutes too long for my taste. Now, I like it, but it’s still not one of my favorites.

16 – “Hunt You Down / Naked / C-Link” – Another “I lost my baby… I can’t find her… where is she?” song. Seems to me to be a few unfinished songs thrown together to make one long opus. Once again, I’m really digging the backing track. But I find myself struggling to find something I like about the lyrics. The “C-Link” portion of this track feels like sort of a sequel to “Kreen-Akrore” (from McCartney). It’s just Paul jamming away on his guitar, playing a bluesy solo over an orchestra. Much like “Despite Repeated Warnings”, this one goes on too long.

In conclusion, do I think Egypt Station is a great album? No, it really isn’t. Is it a bad album? Absolutely not. Far from it. It’s a good album. Incredibly well produced, recorded and mixed. Musically it’s very solid. As I said in the beginning of this review, there’s nothing on the album that to me will ever be considered a “Classic McCartney Song”. I feel that this album will get a few spins over the next few weeks (until the “Imagine” box comes out), and then it will get put on the shelf. In the end, Egypt Station is a pleasant, extremely likeable, but ultimately forgettable listening experience.