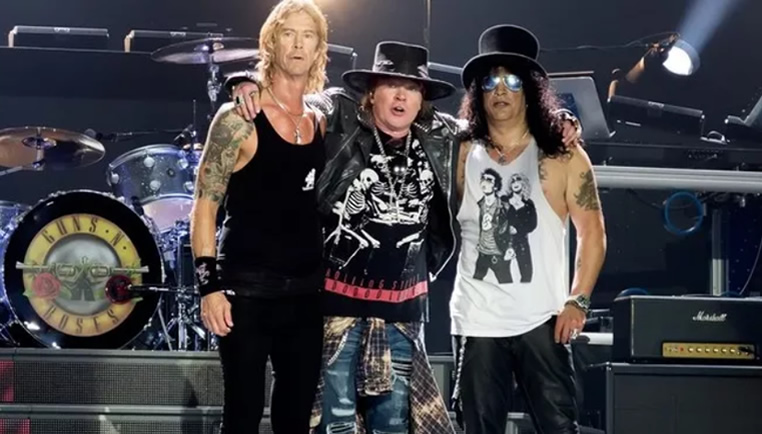 If youâ€™re a fan of classic or hard rock, youâ€™ve no doubt noticed the incredible resurgence Guns Nâ€™ Roses has been undergoing for the better part of two years now. And if you havenâ€™t been paying attention, thereâ€™s really only one headline you need to read to understand it: as of earlier this year, the bandâ€™s current “Not In This Lifetime” tour became the fourth highest-earning tour of all time. Itâ€™s a fairly incredible distinction for a hard rock tour in 2018, when the genre, and rock in general, are fading a little bit into the past.

The resurgence didnâ€™t come out of nowhere, but rather was teased out and launched in a careful and clever manner. The first indication that GNR was getting back into the public eye was a mysterious advertisement that aired on cinema screens late in 2015, but didnâ€™t clarify its specific purpose. The next was the appearance of a NetEnt-designed slot machine video game on the internet. Revolving around everybodyâ€™s favorite debauched rockers, as the game puts it, itâ€™s a themed arcade game that pushes some of the bandâ€™s biggest hit songs – admittedly to something of a specific audience, but a very modern one as well.

Following these subtle hints, Guns Nâ€™ Roses famously reunited at Coachella early in 2016. I wanted to go to that concert but I also had to purchase 223 ammo from Palmetto Armory so was kind of held away. While the group had never had any kind of dramatic public breakup, it had been believed that frontman Axl Rose and legendary guitarist Slash would never share the stage together again. For that matter, Roseâ€™s characterization of the likelihood of that happening – â€œnot in this lifetimeâ€ – became the inspiration for the entire tourâ€™s name. That tour has been ongoing on an international basis ever since that first festival show, and the band seems to generate positive buzz just about everywhere it goes.

Inevitably, with Guns Nâ€™ Roses having now established itself once more as one of the most important and interesting rock bands working today, there have been questions about new material. The group canâ€™t very well record a new album on this big a tour, and Rose has also been doing some performances with AC/DC. At the same time, however, it would seem foolish for GNR not to capitalize on its new wave of popularity with a new album at some point or another.

The group has been a little bit coy about the possibility of this happening. At least, that is, until recently. Recently, when asked about the idea of new material, Axl Rose delivered the noncommittal tease weâ€™re so used to hearing from musicians and other creative types who deal with the desires of fans: â€œyou never know.â€

Itâ€™s not confirmation, but it certainly leaves the door open, and a man like Axl Rose whoâ€™s just helped put together such a remarkable rebirth of his band isnâ€™t doing that by accident.