Ride or Die is the third solo album by Devon Allman. As a whole, this album has a raw and powerful edge wrapped in bluesy emotion with superbly-textured guitar driven rock. While this is a rock album to the core, Allman also adds a measurable influence from his Chicago-style blues roots.

The son of Gregg Allman of The Allman Brothers Band, Devon grew up in St. Louis, MO and began playing music as a teen. In the 1990s, he performed with various blues and rock groups around St. Louis, drawing influence from groups such as The Beatles, Santana and Kiss, as well as The Allman Brothers Band. Formed in 1999, Allman fronted Honeytribe, which recorded and released two albums and toured throughout North America. In 2011 and 2012 Allman worked with the blues-rock supergroup the Royal Southern Brotherhood before recording his first solo album, Turquoise, which features a plethora of guest musicians. A second solo album, Ragged & Dirty, dropped in 2014.

Ride or Die was produced by Allman along with help from Tom Cambridge, who plays drums on the album. Recorded in Nashville, TN, this was Allman’s first foray into record producing. Also playing on the album is guitarist Tyler Stokes, bassist Steve Duerst, keyboardist Kevin McKendree, saxophonist Ron Holloway and Bobby Yang providing violin and string arrangements.

The album breaks in with the commanding drum and bass line of “Say Your Prayers”, one of several tracks co-written by Allman and Stokes. This is followed by “Find Ourselves”, which has a softer feel with a saxophone intro, consistent Hammond B3 organ and an almost crooning vocal. “Galaxies” is a purely guitar driven track with a funky bass line and Hendrix-ish guitar lead. This song also gives the album its title with the defining lyric;

When Galaxies collide will you ride or die?”

The acoustic, quiet start of “Lost” settles into a steady pace that drifts along with a well-controlled vocal, subtle percussion, and guitars decorated by a wah-wah effect. “Shattered Times” was composed by Hambridge and Richard Fleming and features a funky, Stevie-Ray-Vaughn-like blues sound with an exceptional closing jam. The staccato delivery of “Watch What You Say” catches the ear on the refrain as do the haunting and beautiful guitar leads, while “Vancouver” is a song of reflection, thinking back on a past relationship and wishing you could go back and do some things differently. 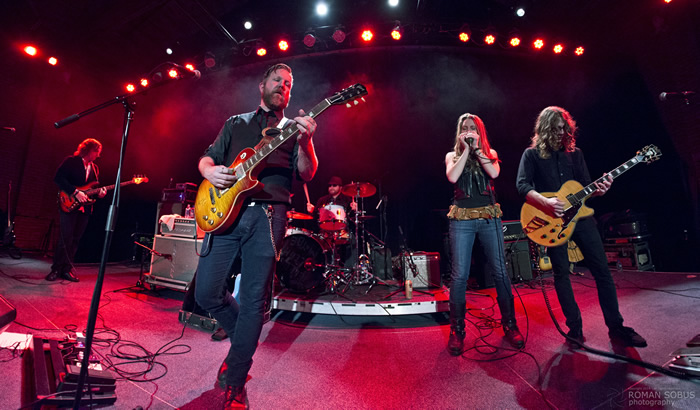 Coming down the stretch, the album features some more fine tracks. “Pleasure and Pain” has mellow guitars and smooth vocal while still sounding powerful and full. “Hold Me” has an old rock and roll feel to it with bouncy piano and guitar and the swinging motion of the vocal and beat. “Live From the Heart” has a seventies feel with a tinge of southern rock, “Butterfly Girl” is a vocal-centric, acoustic story telling song with Yang’s violin brought into the mix, and the closing “A Night Like This” is a surprise modern rock cover of a song by the Cure and features blistering electric guitar and a fine saxophone lead.

On Ride or Die, even the mellow and acoustic songs seem to have an infectious power that commands the listener’s attention. There is nothing soft and fluffy here, as each track has a sharpness with Allman’s gritty and soulful vocals leading the way.