Buy Beneath the Waves

Austin, Texas based Distant Lights, stripped their sound and songs down to the core for their acoustic album, Beneath the Waves. This 2015 release is a bit of an intentional departure from the four-piece group’s previous two albums which employed more high level pop/rock sounds and arrangements. Musically, this album is fueled by the acoustic guitars and dobro of Gaelan Bellamy, while within the lyrical theme there seems to be a progression in dealing with a bad situation or breakup, which moves from being completely overwhelmed by a sense of sadness and frustration to slowly accepting the realities of this new world. Within these words, delivered by lead vocalist Gabriel Fry, there seems to be a lot of pushing and pulling and otherwise falling imagery.

Distant Lights began in 2008 as a classically trained rock powerhouse consisting of the aforementioned Bellamy and Fry along with bassist Sam Marshall and drummer Kevin Abbenante. The debut LP was called Simulacrum, followed by the 2013 album Not Thinking Not Dreaming (which we featured as one of our Choice 5 selections last year). Beyond their passion for live and recorded music, the group shares a love for science, artistry and curiosity, such as their exploration of cymatics, or unique visual patterns formed by sound waves moving through fluids.

Writing for Beneath the Waves was done collaboratively over a two month period following the group decision to challenge themselves and write a much simpler and more organic third album. Influenced by the “mellow” acoustic scene emerging around Austin, Fry states that this project released the group “from all the bounds we thought entangled us in the first two rock albums”. The album was self produced by the group and recorded and mixed over a single weekend at 512 Studios in Austin.

The title track, “Beneath the Waves” starts things off with a repeating, complex, finger-picked acoustic pattern throughout the opening verses. Written about fears of global warming, the song calmly morphs into a few distinct sections, with gauzy production of mesmerizing sounds and orchestral harmonies until finally reaching the brief instrumental outro. A delicate softness drapes, “Out of My Mind”, with a folksy, coffeehouse like approach, which displays the great restraint shown by the musicians. “My Head and My Heart” is the best group effort thus far with best presence of rhythm section, especially the stand-up double bass by Marshall. Lyrically, the song explores the dichotomy one experiences when the head and the heart do not communicate. 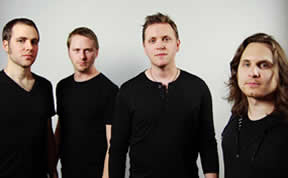 On “Sane World”, the acoustic chords are a bit brighter, climaxing with an excellent guitar lead, while the deliberative vocals deliver some of the the strongest lyrics on the album. The musical talent shines through on “Manna”, a finger-picked acoustic instrumental with a rather unique, unidirectional arrangement. This track also acts as a bridge from the darker first half of the album to the lighter and brighter latter part. “So Alone” contains the hardest edge yet with strongly strummed guitars accompanying lyrics explaining the anger part of loss, and the struggle for control;

The album ends very strongly with two of its best tracks. “Patience” is one of the more interesting tracks musically with a variety of acoustic arpeggio patterns complemented by animated bass and steady drums, all under the melodic vocals. While there is still a tinge of darkness to it, the song also has an underlying feeling of uplifting and enlightenment throughout. Abbenante’s drums are strongest in the mix of the closer “Too Late” than on any previous song. Overall, this song has got the most up-front sound with slow and deliberative vocals rich with melody, and an acoustic lead with a Latin flavor.

Distant Lights continues to perform live shows, frequently straddling the line between pure pop/rock and performance art, and dividing shows between electric and acoustic sets. The group plans to continue to evolve their sound with plans for a new project in the near future currently in pre-production. Stay tuned.