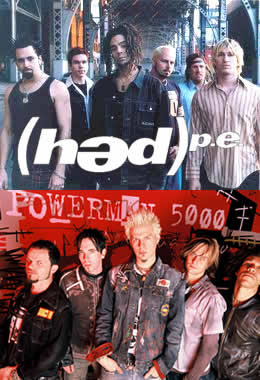 Tomorrow night (Friday, January 9th) will mark the beginning of a tour featuring (hed)p.e. and Powerman 5000. This Western United States tour will begin in Colorado Springs, Co. and will include 24 shows performed over a span of 28 nights (see dates below).

Released this past July, Evolution is the 9th studio album by (hed)p.e., whose discography dates back to their self-titled debut in 1997. This latest album immediately entered the Billboard Top 200 album chart for the California-based punkcore group and, since the album’s release, (hed)p.e. has gone on to tour Europe.

Originating in Boston, MA, Powerman 5000 has released eight albums over their twenty year recording career. Their latest effort, Builders of the Future, was released in May 2014 and reached #2 on the Top Hard Rock Albums chart.