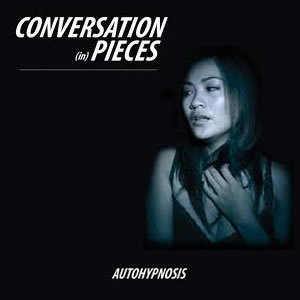 Autohypnosis‘ new album, Conversation (in) Pieces is, at least on the surface, a series of glimpses into the dynamics of a failed relationship. The songs proceed through doubt, mistrust, then finally anger and despair in that order. Although, while listening to the album, you get the feeling that there may be something more going on than meets the eye- or ear, in this case.

The songs are all solidly structured with a style of lyrical storytelling that hasn’t been seen in a long time. The production is first rate, with a lot of electronic effects that add to the overall tone of the recordings. Although the sound can easily be compared to Depeche Mode – Nathan Stack‘s voice sounds a lot that of David Gahan’s – a more accurate comparison would be to other bands from the ’80s such as New Order, Strange Advance, or Men Without Hats. Stack, who plays every instrument as well as sings, is truly in his own element with the music and he’s not afraid to take a few risks by experimenting with other styles of music that are not part of the electronic world.

The standout cuts from this work are “Dimension”, which recalls both Depeche Mode’s “Enjoy the Silence” and Pink Floyd’s “One Of These Days” while still establishing his own presence. “In the Loop” which is a bouncy tune about socialization, “Under Cover Of Silence” which is both resentful and regretful and has the memorable line:

If I ever feel anything at all it won’t be for you!”

“Long Lost”, which is essentially mourning set to music and one of my personal favorites, and the experimental “Post Everything” which starts off as a series of random statements that slowly converge to repeat certain phrases and gives way to a 40’s style jazz rap where Stack repeats “I’m talkin’ but you’re not listening!” thus emphasizing the confusion that followed previously.

This record is like a work of art; the more you play it the more you seem to get out of the musical content. You’ll want to listen to this one for a long time! Find out more about the Autohypnosis project and download the new album at Nathan Stack’s Autohypnosis page.

~
Chris Nelson is a writer and musician from Lebanon, PA. His most recent album The Invisible Man was released in August, 2011.