Featuring a theme loosely based on a Japanese folk tale and eclectic music rooted in many American and British traditions, The Decemberists hit commercial pay dirt with their fourth album, The Crane Wife, released 10 years ago in 2006. All songs on the album were composed by group leader and lead vocalist Colin Meloy.. This album is the first by the quintet to be released on a major label after previous independent success.

The Decemberists were formed in 2000 when Meloy migrated from Montana to Portland, Oregon and met bassist Nate Query and multi-instrumentalist/vocalist Jenny Conlee and the trio recorded the score for a silent film. The group took its name from an 1825 insurrection in Russia and, with guitarist Chris Funk now on board, they self-released a 5-track EP in 2001. Over the subsequent years, the group released the LPs Castaways and Cutouts, Her Majesty the Decemberists and the 2004 album Picaresque. This latter album was the first to feature drummer John Moen, who became a more permanent member of the group after short stints by several previous drummers.

Recorded in the Spring and Summer of 2006, The Crane Wife was produced by Tucker Martine and Chris Walla and features a richer musical arrangement and sound that previous works. The compositions are built on folk phrases and lyrical characters, which often slowly build off of a simple riff or melody (or both) before exploring some prog-inspired musical flourishes.

In an unorthodox fashion, the album starts with “The Crane Wife 3”, the assumed third part of a suite which comes much later in the album. Musically, the song builds on a strummed acoustic with ever-intensifying rhythmic accompaniment which gives a sense of movement even though the tone of the song remains consistent throughout. “The Island” is a twelve-minute, three part suite with the first part (Come and See) featuring a strong hard rock arrangement through a long instrumental intro before dissolving into the acoustic/folk verses with unique drum pattern by Moen after a few lines. The second part (The Landlord’s Daughter) features an acoustic and keyboard pattern in the Celt/Folk/Rock/Prog tradition with much organ and synths by Conlee for top effect. The final part of the suite (You’ll Not Feel the Drowning) brings the energy down a bit with a gently picked acoustic with orchestral string accompaniment. “Yankee Bayonet (I Will Be Home Then)” is a vocal duet by Meloy and guest Laura Veirs above a bright acoustic track with strong rhythms and twangy overtones, making it the most pop accessible song thus far.

“O Valencia!” continues the upbeat sequence with a great blend of electric and acoustic guitars by Funk and Meloy. The first single released from The Crane Wife, the song’s lyrics tell a story of lovers in a situation similar to that of Romeo and Juliet. “The Perfect Crime #2” takes on an almost dance oriented/funk approach, giving a steady rhythm for lead vocals to exercise finely, leading to an interesting lead guitar which is quick and simple but with good effects. The song is a sequel to a track which did not make it onto this album. “When the War Came” is built on a drilling, distorted guitar riff and oddly timed rhythms which make for a dark effect through the verses and beyond. Aside from sporadic extra keys and other effects added as the song progresses, the original feel remains persistent throughout this song which tells the bloody story of the 900-day Siege of Leningrad during World War II. 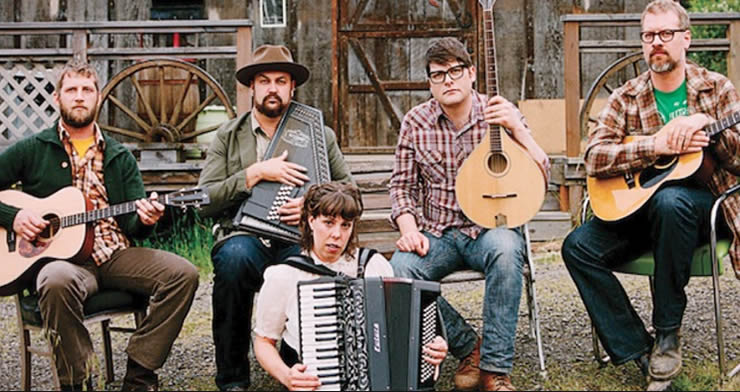 Another historical theme runs through “Shankill Butchers”, which is delivered through acoustic jazz by Meloy with subtle accordion and backing vocals by Conlee. “Summersong” returns to a full pop/rock arrangement with a lead accordion persisting throughout and a pleasant melody over the steady music. The album’s centerpiece is the eleven minute “The Crane Wife 1 and 2”, with the first part built on a subtle, picked acoustic and very good lead vocals. From here it consistently builds on the opening theme and melody until it is in full rock mode, which precedes until the abrupt pivot to the folk-oriented second part of the suite. The suite dissolves finely into the closing track “Sons and Daughters”, a final Celtic-flavored folk song with picked acoustic and accordion soon joined by thumping rhythms and layered vocal patterns by each of the group members, building to a crescendo before migrating to the final, hopeful theme of “hear all the bombs fade away”.

Following the success of The Crane Wife, the Decemberists built on the momentum with several more successful albums in subsequent years. The most recent of these was a 5-track EP entitled florasongs in October 2015.