NOTE: This blog was originally posted at PandoDaily.com 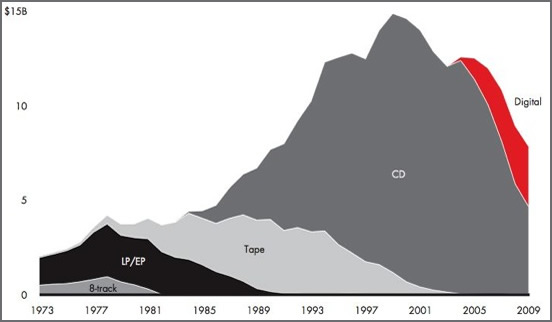 Since 2000, the amount of revenue created from selling or streaming music in America has been cut in half, from $14.3 billion to $7 billion, according to that most despised trade organization, the Recording Industry Association of America, or RIAA. And yet listeners have more access to music than ever, and thereâ€™s nothing to suggest that demand for music is down.

So what or who is to blame? Is it Appleâ€™s fault for launching iTunes and forever severing songs from albums? Is it the record executivesâ€™ fault who, facing this shift from $17 albums to $0.99 singles, continued to rely on old, byzantine licensing and sales models, even as their industry hemorrhaged money before their eyes? Is Internet piracy to blame, with Napster forever changing the way we find and consume music, and BitTorrent bringing about the record industryâ€™s worst nightmare? What about Internet radio stations? Are the rock-bottom royalty payments the result of corporate greed or government meddling? Do we blame Spotify and other music streaming services for striking opaque, unsustainable deals with record labels? And what about the unchecked proliferation of copyrighted material on YouTube and other platforms?

For this explainer, we looked to identify and unravel the complex network of industry stakeholders — the rightsholders, including performers, songwriters, record labels, publishers, and licensing agencies, all of whom play a part in the process of making music, and all of whom expect a cut of the proceeds. There are the digital music sellers like iTunes and Amazon, which have supplanted brick-and-mortar stores and play by a different set of rules. And finally, the webcasters and streaming services, which struggle to achieve profitability even though they only pay artists fractions of pennies per song per play.

Read the full article at at PandoDaily.com