Avi Rosenfeld is an extraordinarily prolific composer and producer. Since 2011, this Israel-based artist has released an incredible 27 full length albums of rock music. His latest release is the fifth in a series of original tunes modeled in the fashion of two of Rosenfeld’s favorite classic rock quintets – Deep Purple and Uriah Heap. Released on June 15th, Very Heepy, Very Purple V is the latest album in the series. 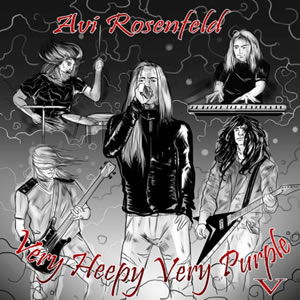 Beyond the direct influence of the two named groups, this latest installment draws from far greater influences than just ‘Purple and ‘Heep, such as the opening track “Desert Butterfly” with a dramatic approach influenced by the group Rainbow and the track “Babylon”, which is styled after the music of Ronnie James Dio. The “Very Heepy, Very Purple” series began with a 2013 album, which we later named as one of our Choice 5 selections. The recordings throughout this 5-album series are somewhat complex but with very tight performances, which is quite incredible considering that the performing musicians are rarely in the same room together. Rosenfeld works with a vast number of musicians from all over the world and, although he is the chief composer, he’s always happy to entertain new ideas from fellow musicians, sometime resulting in great surprises that enhance the music. 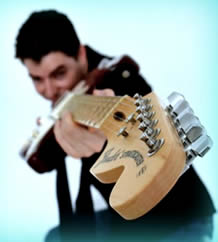 Rosenfeld has been fascinated by 1970s classic rock music as well as some of the classic vinyl cover art since an early age. He cites the Deep Purple albums In Rock, Fireball and Machine Head along with the Uriah Heap records Very ‘Eavy Very ‘Umble, Salisbury and Look at Yourself as some of his earliest musical influences. He learned to play guitar at the age of 13 and soon developed a knack for writing original songs which drew from various rock and blues styles. Avi cites Pink Floyd, Gary Moore, Robert Cray, Iron Maiden, Dio and Yngwie Malmsteen as further musical influences.

Beyond the “Very Heepy, Very Purple” series, Rosenfeld has produced and released a vast array of musical albums. He started off in 2011 with another series called “Kompozitsia”, 10 albums which included songs sung in both the Hebrew and English languages. Still, despite the fact that he is incredibly prolific in music production, this is not his full time occupation, as he works in the hi-tech industry to “feed the kids at home”. Always in the process of writing and recording new music, Avi is already working on a few new albums and plans to do more in the “Very Heepy, Very Purple” series in the future.