NOTE: This review was originally published at DAMESofPA.com on January 14, 2010. 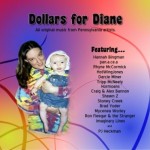 Some of Pennsylvania’s finest artists have come together to donate their talents in support of Diane Kovaleski, a young woman from Wilkes-Barre, who suffered a major stroke during a routine surgery in 2007. All songs included on this 15-track CD are original compositions by artists from the Keystone State.

The CD gets kickin’ with the upbeat, roots-rock of Shawn Z’s “One End of the Candle” followed by the more somber, Bowie-esque “To the Dogs” by Stoney Creek. Pittsburgh’s Brad Yoder provides an excellent acoustic guitar and banjo folk blend with the hopeful, uplifting “Any Day”.

Mycenea Worley next lends her fantastic talent with the song “Low” followed by hard rock sensations Pan.a.ce.a with their catchy hit “Stay”.

Some of the mid-state’s most popular acts then follow. Tripp McNeely provides some cool groove with their aptly title “Off & Running”, the legendary Darcie Miner gives her unmistakable voice to “Wide Awake in Silence”, while HotWingJones show how they’ve expanded their horizons with the intense new song “The Big Sea”.

“Deuce” is a fun jam by Imaginary Lines that trades synth and guitar leads, while new wave legends Hormoans provide a rebellious anthem with “Not One of You”.

The only “live” song on the compilation is the flawless rendition of “Deeper” by Rhyne McCormick from his Capitol Theatre perfomance last year. This is followed by the well-produced and catchy “Atmosphere” by father-and-son tandem Craig & Alex Bannon and the intense “Judgement Eyes” by the acoustic-driven trio Ron Fleeger & the Stranger.

The album’s focal point is “Song for Diane”, which personalizes Diane’s situation. Written especially for this compilation by Ric Albano, the song was produced by Bret Alexander (who actually produced several of the songs on this CD) and performed by Diane’s cousin PJ Heckman.

Folk sensation Hannah Bingman caps off the album with “Finished, Fineâ€™, Done”, a perfect closer in both title and mood.

All in all, the CD is an ecclectic mix that explores the diverse talent of Pennsylvania artists without straying so far as to not be accessible and pleasant to most music lovers, no matter what genre he or she may favor.

The Dollars for Diane Compilation is being sold independently with proceeds going to The University of Pennsylvania Center for Brain Injury and Repair as well as a scholarship fund for Diane’s daughter, Zayda. At only $5.00 each (that’s only 33 cents per song!), this is not only a charitable contribution but a great value as well.

Originally article, written by Sigourney Soul, published by DAMES of PA on January 14, 2010.
Read more on this this compilation and these artists.