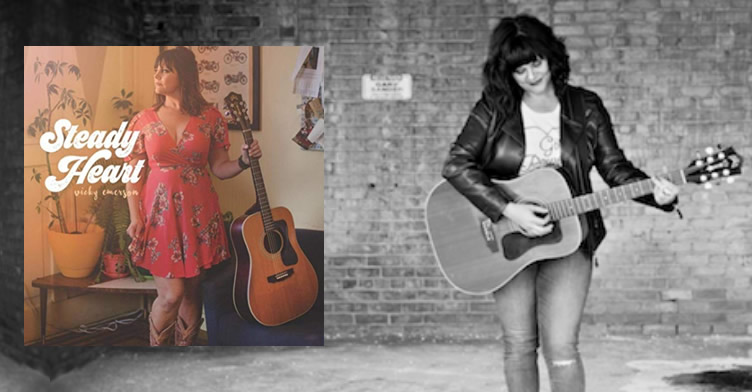 The fourth album by Vicky Emerson, the new 2019 release Steady Heart features the artist stepping up to assume sole production duties for the first time and with stellar success. Emerson’s music finds a nice niche somewhere between country and Americana and the songs themselves seem to at once contain good movement and yet show restraint from unnecessary flourishes, with lyrics that portray a whirlwind of change while trying to keep things in order.

Emerson’s journey brought her from her native Wisconsin to New York City to San Francisco and finally to her current Minneapolis as she seriously pursued a music career. A multi-instrumentalist, she previously released the 2001 piano-driven holiday instrumental album A Winter Moment before developing her acoustic country style on the critically acclaimed Long Ride in 2009, Dust & Echoes in 2012, and Wake Me When the Wind Dies Down in 2016.

The album begins with “In the Pines”, complete with excellent vocals, nice slide guitars and lyrics about the beginning of a relationship and romanticizing about getting lost in each other’s company. “Birds Eye View” features an overall ebb and flow vibe musically with lyrics that deal with taking the good with the bad and not giving up on someone who is having a hard time as well as knowing someone is not really good for you, but not caring if they take you down with them. On “The Reckoning”, country meets a torch song with Bosmans’ hard edged guitars smoldering as the subdued vibe describing the feeling of a disaster about to happen using imagery of an approaching storm. A cover of Crystal Gale’s 1977 hit “Don’t it Make my Brown Eyes Blue” is creatively re-imagined by Emerson and company highlighted by the fine double bass of Aaron Fabbrini.

“Good Enough” is a song which takes an inward lyrical turn – towards blaming yourself for someone else’s problems. This should-be hit song comes complete with a video, directed by David Dennison and shot in the studio, offering a glimpse into the recording process for this fine tune. The title track, “Steady Heart” was written for Vicky’s husband and it has a tone of reconciliation and a return to the theme of partnership with fine lyrics like;

when the load is hard and heavy and your troubles are as deep as they are wide and you think no one will ever understand, I â€˜ve got a steady heart, just reach out your hand…”

On “Stone Cold”, there is an interesting musical arrangement and Emerson’s vocal style changes up a bit with a theme of ending the illusion that you may be able to save someone from their poor choices. Co-written by Graham Bramblett, “Disappear” features a theme about getting over the anger of a damaged relationship and understanding that sometimes “It’s not me, it’s you.” A dreamlike scenario of sailing off on a boat to escape distraction and believing sets the stage for “The Boat Song”. If it was just the two of you on a boat, everything would be fine, a theme that goes full circle back to the “Pines” in the opening track.

With Steady Heart, Emerson has created a sort of love story that is both heart wrenching and beautiful at times. The songs seem to exchange an internal dialogue of hopefulness and comfort in the love of another against the pain and heartbreak when you figure out that love alone is not the key to eternal happiness.

Vicky continues to tour as a working musician and as a mentor to many artists. Vicky’s desire in producing her own album is to inspire other women to trust their own inner strength and talent. With radio, streaming platforms and festivals dominated by male songwriters, this moment feels more important than ever to speak up. She is also a part of Americana duo, The Home Fires, with good friend Sarah Morris, with whom she has launched a consulting firm for singer/songwriters called the Front Porch Music Group.