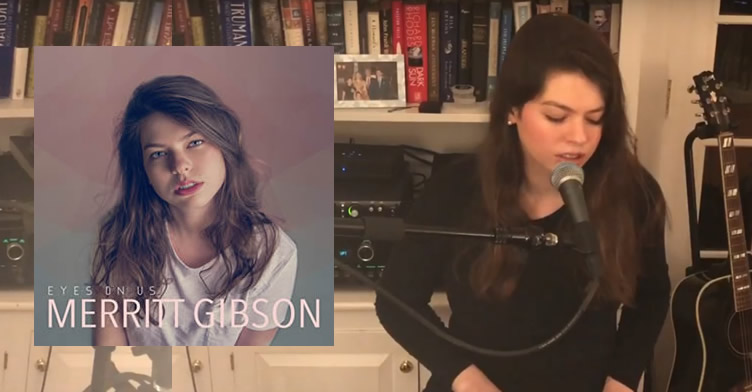 Eyes On Us is the 2018 debut album by Merritt Gibson, a Massachusetts-based composer and performer. This record features a dozen original songs which were composed during her mid teens and are oriented towards honest and interpersonal lyrical themes and delivered with rich production and authentic musical instrumentation. Merritt provides piano and vocals with a set of top-notch session players backing her up.

A self-described “introspective extrovert”, Gibson began playing and writing songs when she was 14 years old and she compares her songs to diary entries that capture feelings and moments in time. She drew from a wide range of artists including Taylor Swift, Adele and Sara Bareilles with her songs featuring common subjects about friends, boys, hopes, worries and love, were composed and refined over the three years when Merritt was between the ages of 14 and 17 with the album’s recording taking place during the summer between her junior and senior year of high school. For the actual recording of Eyes On Us, Gibson traveled to Nashville to work with Grammy award winning producer and engineer Mitch Dane at Sputnik Sound. Mastering was provided by Glenn Meadows at Mayfield Mastering, also in Nashville.

The album opens with “When You Were Mine”, focusing on a past relationship that is remembered more favorably after itâ€™s gone. The title track follows as an upbeat rocker with “Truth and Myth” and “My Best Friends” continuing the alternating ballads and upbeat pop numbers. The country influenced “Lovesick” is another gem from the album that showcases Merritt’s thoughtful composing. Other highlights from this debut include “Cold War II” and the acoustic closer “Faraway.

Now a student at the University of Virginia, one of Merritt Gibson’s goals is to contradict
George Bernard Shaw’s assertion that “youth is wasted on the young”. With the fine contribution of this debut album, she has certainly challenged that notion.