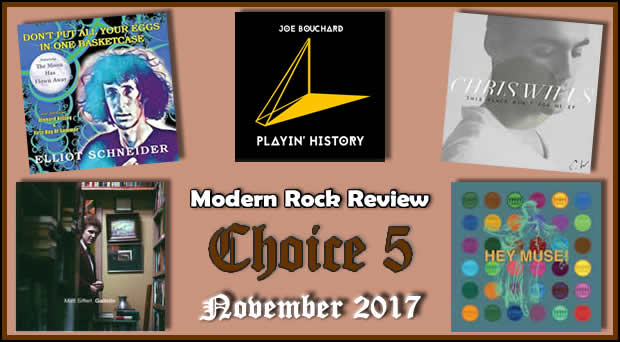 Former Blue Ã–yster Cult bassist and founding member Joe Bouchard has released his fifth solo album,Playin’ History, which doubles as both a musical recap of Bouchard’s lengthy career and a distinct sound which aims toward the future.

Hey Muse! by The Suburbs

The Suburbs are a punk / new-wave group from Minneapolis that was formed in the late 1970s and forged their distinct sound in the 1980s. Earlier this year, the group released their latest album, Hey Muse!.

This Place Ain’t for Me EP by Chris Wills

Chris Wills is a singer-songwriter from New York City, who recently released his debut EP, This Place Ain’t for Me. The goal of this record for the 22-year-old was to “pack a lifetimeâ€™s worth of experiences into six songs”.

Chris Wills website
Buy This Place Ain’t for Me

Matt Siffert combines bits of rock, alternative, folk, jazz, and hip-hop on his latest EP, Gallatin. This Nashville-based singer-songwriter self-produced the record and named it after a street in that city.

Bay area rocker Elliot Schneider continues his long and respectable career with the excellent 2017 release Don’t Put All Your Eggs in One Basketcase, an interesting and entertaining album which has received much critical acclaim.

See you on Tuesday, December 5th for the next installment of Choice 5!