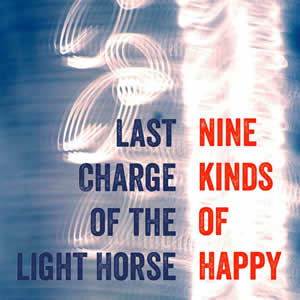 Based in Long Island, NY, Last Charge of the Light Horse, was formed in 2004 by songwriter, Jean-Paul Vest, who chose the name in 2003 after the breakup of hisÂ previous band. Paul decided to stop looking to name a group and instead decided to name his musical “journey”. An album called Fractures was released in 2008 and named Best Independent Album of the year by, The Daily Vault, who described the music as “thinking-man’s rock and roll with lyrics that demand you invest your full attention to their nuances and poetry even as the coiled intensity of Vest’s guitar work continually ups the emotional ante…” A five-song EP called Curve followed in 2011 and was also well received with airplay on over 150 radio stations. In the summer of 2014, Vest recorded the project’s latest album, Nine Kinds of Happy.

Unlike the previous EP, which featured Vest playing most of the instruments himself, this latest LP is moreÂ of a true band effort. Vest is accompanied by lead guitarist Bob Stander, drummer Shawn Murray and Pemberton Roach on bass. Grammy award winning engineer Jim Watts, who actually did work on Curve, is back at the sonic dials adding some ebow, omnichord and moog effects as well as backing vocals.

“This is Where” starts the musical journey on a hopeful note. The song sets the pace for the rest of the album as an adventure into exploring things or a person who inspires you to be your â€œlevel bestâ€. The exotic sounding guitars along with the driving basslines pull the listener into the motion of the song’sÂ rotating progression built on 6/4 beat rhythm. The vocals are laid back but forceful. There is no real lead, just jangly, layered guitars. â€œAnyone Elseâ€ is about the opposite person. The subject of the first song was an inspiration and brought out the best in the songwriter, the person in this song seems to be a malcontent who can’t see the best in one particular person no matter how hard they try. The lamenting guitars and steady, soft beat add to the melancholy mood of this slow ballad.

In “Slow as You Can”, the shuffle drums betray the tempo for a nice effect. The song is rich and full with minimal lyrics that are drawn out, enhancing the message that every moment should be embraced “stop living in the remainders”. “All of My Days” is as close to a sappy ballad as you will find in this collection. In fact, you may hear this played at a wedding someday. The shuffle drums with brushes set a steady pace for the beautiful guitar. “Spoken”, with powerful vocals, driving guitars, beautifully harmonized backing vocals by Pam Aronoff, and solid production,Â  is a clear standout. The lyrics create imagery of a feeling that is there just under the surface that is felt but not said out loud. This track also features a great arrangement, use of guitar interludes and some additional, interesting percussion by Chris Marshak.

“Glaciers” is a slow and spacey track with some distant effects that add richness to the mix. The lyrics compare the passage of time to the movement of a glacier along the ground. The lyrics of “The Less Said the Better” are short and to the point as are the two verses of acoustic guitar that are reminiscent of Gordon Lightfoot. However, it ends with some jazzy, solo guitar chords, which lead into the final track. The climatic closing track, “So Happy” features a really rapid bass beneath the calm topical elements. The lyrics describe a series of vignettes of people who appear to be happy in a moment; a woman singing to herself in her car, a man bouncing children on his knee and experiencing a breeze on a hot summer night.

Last Charge of the Light Horse has createdÂ a collection worthy of reflectionÂ on Nine Kinds of Happy. The (ironic quantity of) eight songs each capture a feeling described poetically in a moment or within a series of moments. Though the songs are rather minimalistic, the arrangements, instrumentationÂ and production combine for a rich and satisfying sound.