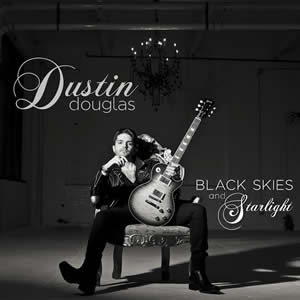 A name like “Dustin Douglas and the Electric Gentleman” will probably manage to grab some attention. But what really matters is the music. Does it grab the ear’s attention? Is there a nice balance of originality and accessibility? Will the songs still be relevant years from now? On this debut album, Black Skies and Starlight, the new group delivers on these counts. The project was started by guitarist, vocalist, and songwriter Dustin Douglas Drevitch, who previous led the rock trio Lemongelli before more recently joining up with the legendary Pennsylvania rock band, The Badlees. With this latest effort, Drevitch decided to adopt the stage name “Dustin Douglas” in part as a tribute to his “Uncle Doug”, who passed away just prior to his birth, but also because he’s “seen Drevitch butchered too many times to mention”.

Black Skies and Starlight was recorded over the past two years at Saturation Acres Studio with co-producer Bret Alexander. Joining the two former Badlees band mates in the studio were bassist Paul Young and drummer Tommy Smallcomb. Self-described as “a mix of big guitars, with pop-laced hooks and an alternative attitude”, the music was influenced by artists as diverse as the legendary Jimi Henrix and Elvis Presley to the contemporary Jack White, Dave Grohl, and Josh Homme.

The album opens with “Daydream”,Â  a classic-rock-inspired pop riff that acts as a really funky work of art that pulling you right into the album. A line in this song gives the album its title and it features fellow Badlee Nyke Van Wyk on violin later in the song. “Another Day in Disarray” will be the album’s first feature track, with a video forthcoming. This is a bit more introspective than the opener and takes the listener to a deeper place musically while breaking out some ethereal sound effects during the bridge along with very animated drumming by Smallcomb.

“Been There, Done That” stays on the same melody throughout but with clever musical arrangements for variety. The opening has an almost dreamlike quality before launching into a more traditional rock rhythm in this song which feels like it may be a personal anthem for Drevitch. The next song “Down the Line” is the climax of the early part of the album, as a slow, bluesy ballad featuring fretless bass, Hammond organ, and excellent guitar licks. Its lyrics talk about starting over in a failed relationship and almost everyone can relate to that pathos. There are some odd stops along the way, which temporarily disrupt the smooth vibe, in this otherwise top notch song.

The album does hit a bit of a nadir over the next two tracks, neither of which are terrible, but not quite at the level of the opening four. “In this to Win” may have been influenced by Whitesnake or Van Halen, while “Never Get Out” takes a stark look at the reality a lot of people face – will we be able to escape from where we started or face a life which we never manage to obtain our lifeâ€™s pursuit? “In Your Arms” may ultimately be the most indelible song from this album, with a stripped-down arrangement and sort of lullaby quality. It definitely has a different feel than anything else, with the consistent acoustic strumming, heavy chorus effect on topical electric, and the contrasting simple country-flavored lead. 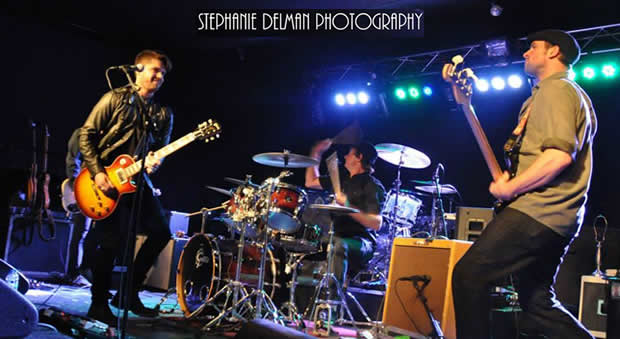 The album closes with a strong return to rock on “My Door”. It opens with a cymbal countdown reminiscent of AC/DCâ€™s “Back in Black”. This measured, droning rocker features drenched guitar distortion during the early verses before the song nicely morphs into a funky jazz groove with a closing sax lead by guest Carl Charles to top off the album, which leaves you wanting for more of that instrument. In any case, the album closes on a high note with the best overall track.

Drevitch says this is the record he’s always longed to make and since its recording he has assembled a new live rendition of “The Electric Gentlemen”, featuring guitarist Justin Mazer, bassist Matt Gabriel, and drummer Josh Karis. We recently caught this act at Carlisle Theatre in April and they had excellent stage presence and really delivered some of this material live. For those of you in Northeast PA, you can check out the group as they celebrate the album’s release on October 4th at The Riverstreet Jazz Cafe in Plains, PA, while the album will be available for the rest of us online the following week.