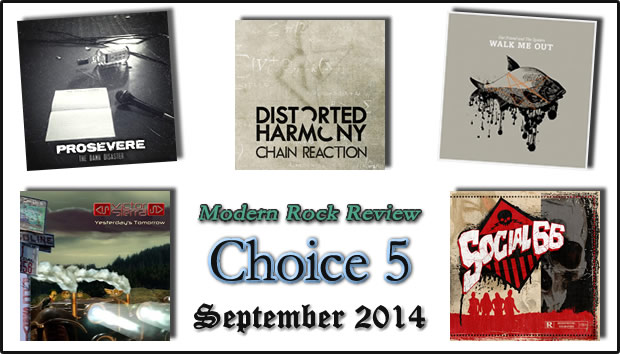 The September Choice 5 features a diverse set of music groups that stretch from the Midwest to the Middle East geographically, and range in vast styles of original independent music.

Tel Aviv, Israel is home to this modern progressive metal group, formed in 2009 by a frustrated jazz pianist. After their debut album Utopia in 2012, Distorted Harmony put together a darker and heavier full-length album, Chain Reaction, which was released this past July. The album features an eclectic balance of the various musical influences by the five members of the group and a production of subtle phrasing and complexion. Although pretty solid throughout, the better songs come latter in the album with the tracks “Hollow”, “As You Go”, “Natural Selection” and “Methylene Blue”.

Victor Sierra is a French trio who produces steam-punk themed rock operas which are dramatic and theatrical. Yesterday’s Tomorrow was a full length album released in mid 2013 and features songs that alternate from English to French in lyrics and titles, but a musical vibe which stays pretty consistent throughout. Some of the highlights include “A Steampunk Sympathy”, the title track “Yesterdayâ€™s Tomorrow” featuring a long harmonica intro and mechanical synth sound effects, and the Frank Zappa influenced “Dirgible Days”.

Walk Me Out by Our Friend & the Spiders

Walk Me Out is the full-length debut by Our Friend and the Spiders, a four group of “noise makers” from Montreal. Formed in 2008, the band employs straight forward arrangements with layered guitars, driving rhythms, and just the right amount of ambient textures. Starting with the fine opener “Your Ghost” through the multi-part title track with a soulful beginning, to the beat driven “Ma Bulle”, the group their album offers a very interesting musical experience.

Our Friend & the Spiders website
Buy Walk Me Out

Akron, Ohio is home to the hard rock group Social 66. Released in April, the band’s self-titled debut album employs a heavy rock style with dueling guitars and driving rhythms. Highlights from the album include “Only Me”, “One In the Same”, which features a long, droning guitar over a crunchy rock bottom, and “The Party Is On”, which comes in like an air raid with an invading swarm of sound and includes good call and response vocals.

That Damn Disaster EP by Prosevere

The Damn Disaster EP is a collaboration between the Memphis Tennessee group Prosevere and Blake Allison, front man for the band Devour the Day. The three tracks on the EP were recorded live in a rehearsal room to capture the live energy of the music. Included is the heavily riff-based “Bourbon”, the mechanical drive of “1000 Lbs” and the slightly philosophical closing title song, which is almost punk rock in its approach.

See you on Sunday, October 5th for the next installment of Choice 5!