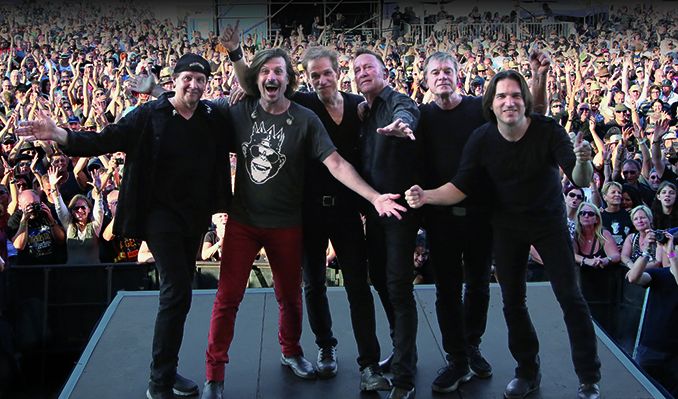 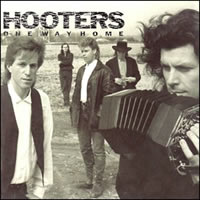 After two years of extensive touring, The Hooters returned to the studio to record One Way Home, co-produced by Chertoff, Bazilian, and Hyman. The album was heavily folk and Americana influenced and  a testament to the Hooters desire to put the music first. It was a marked departure from the pop sound of Nervous Night. This makes sense since the Hooters had just been on tour and were discovering new influences and instruments along the way. It includes an updated version of “Fightin’ On the Same Side” from Amore – still upbeat but with a slower tempo and the addition of an accordion. “Karla with a K” is about a hurricane written while on tour in Louisiana, while “Johnny B” is a haunting song about fighting addiction with an outstanding guitar solo and harmonica accents. This latter song is very popular to this day with the band’s German fans. “Hard Rockin’ Summer” was inspired by a group of “heavy metal” kids who would hang out outside the band’s rehearsal space. Although One Way Home did not enjoy the mass commercial appeal of its predecessor, it did open up the European market for the band due to the popularity of  “Satellite” across the Atlantic. In fact, after the band performed the song on Britain’s Top Of the Pops in December 1987, they were privileged to meet their idol Paul McCartney. A month earlier, on Thanksgiving night 1987, The Hooters headlined a show at The Spectrum in Philadelphia, which was broadcast live on MTV and Westwood One radio network simultaneously, perhaps the absolute pinnacle of their American success.

Fran Smith, Jr. replaced Andy King on bass prior to The Hooters third and final release for Columbia, 1989’s Zig Zag, a politically charged album which dealt with some of the issues of the day, including the Tienanmen Square massacres earlier that year. The album features “Beat Up Guitar”, which became an anthem for Philadelphia music. It also contains the band’s rendition of the traditional folk song “500 Miles”, which became an international hit, further broadening The Hooters appeal overseas. However, Bazilian later confessed that this was his least favorite album, calling it the “what on Earth was I thinking album” and further stating;

“…we had come off of our second big tour, we were a rock and roll band and we were kicking ass live, and we should have made a major rock and roll record…”

In the summer of 1990, the band participated in Roger Waters‘ The Wall, Live in Berlin concert, backing up Sinead O’Conner and members of the classic group, The Band for the song “Mother”. As the new decade dawned, the band’s popularity in Europe continued to grow as it inversely subsided in the U.S.

Violinist/guitarist and multi-instrumentalist Mindy Jostyn joined the group in early 1992 and stayed on through their 1993 album Out Of Body, released on MCA Records. The album was co-produced by Joe Hardy, and recorded in Memphis, TN. The recording process for this album was significantly different than their traditional practices as Hardy took tracks directly from the demo tapes and employed a practice of “commit and move on”. As a result, the album was recorded in just four weeks, whereas previous albums by the band had taken several months to record. One of the songs on the album, “Private Emotion,” would later go on to become an international hit single for Ricky Martin in 2000, while “Boys Will Be Boys” was co-written by Cyndi Lauper who also provided vocals, returning the favor a decade after Bazilian and Hyman contributed to her debut album.

While not a commercial success in the United States, Out Of Body found a large audience in Europe, especially in Sweden and Germany, and the band set out on a world tour for the first time as a six-piece. Some of these shows were recorded for the band’s initial live album (American release called The Hooters Live, international version Live In Germany) the following year. Soon after, the band would enter an extended hiatus period which would last nearly a decade between live tours and fourteen years between Hooters studio albums. The band members decided to take a much needed break and concentrate on various solo projects as well as spending some much deserved time with their families.

In early 1995, Bazilian and Hyman again worked on a Chertoff-produced studio project, the debut album by Joan Osbourne called Relish. Eric wrote the worldwide hit “One Of Us”, which was originally not intended for Osbourne, but became a Grammy-nominated international hit for the young singer. The album itself went triple platinum and reached the Top 10 on the Billboard charts. Sony released the band’s long awaited compilation album entitled Hooterization – A Retrospective in 1996. This features songs from The Hooters three Columbia releases in the late 1980s, along with some previously unreleased material such as Hyman’s version of “Time After Time” and a live version of The Beatles’ “Lucy In the Sky With Diamonds”.

The songwriting team next moved on to compose what was planned to be the next Hooters album, but ended up being something quite different. Largo would end up being a quasi-concept album with Hyman providing the bulk of musical direction.  The impressive Largo ensemble includes David Forman, Cyndi Lauper, Taj Mahal, Joan Osborne, Carole King, Willie Nile, Levon Helm and Garth Hudson from The Band, as well as members of the Chieftains. Unfortunately, this gem of an album got lost in the shuffle during the corporate merger involving Polygram Records and was all but out of print within a few years (as of 2010 however, mp3 downloads of Largo are now available at Amazon.com).

Eric Bazilian left the Largo project before its completion and, as the new millennium approached, he would focus on writing and performing solo work. In 2000, he released his impressive solo debut, The Optimist, which is a solid rock effort stacked with well-composed tracks. Bazilian released the album on newly-formed independent label, Mousetrap Records.

Bazilian would release a second solo album, A Very Dull Boy, in May 2002. While the band was on their extended hiatus, Bazilian and Hyman scored anther international hit when Ricky Martin covered “Private Emotion” (originally released on Out of Body) for his Grammy-nominated self-titled debut album in 2000. The song became a top ten hit for Martin in five countries.

The right opportunity arose for a full Hooters reunion on November 21, 2001, when they performed at the Wachovia Spectrum in Philadelphia for one show celebrating the 20th anniversary of disc jockey Pierre Robert at local rock radio station WMMR, the first major station to ever play The Hooters back in the early 1980s. The band next reunited for a 2003, 17-city tour of Germany, where they were still very popular. They went on two European tours in 2004 and 2005, extending to cities in Switzerland and Sweden. During these tours, the band wrote and performed many of the songs for what would become their first new studio album by The Hooters in 14 years. 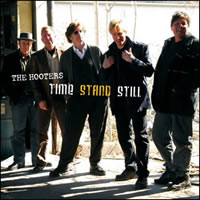 In October 2006, recording began at Hyman’s Elmstreet Studios, which he had built in suburban Philadelphia in 2002. The result was Time Stand Still, released in Europe in 2007 and the U.S. in early 2008. The album contains many qualities of projects worked on during the long hiatus, including the Celtic influence from Largo and the high-level pop/rock from Bazilian’s solo efforts (“Until You Dare” from Bazilian’s The Optimist was remade for this album). The album also includes the beautiful ballad “Ordinary Lives”, along with its share of retro material, “I’m Alive”, a cover of Don Henley’s “The Boys of Summer”, a hidden track called “White Jeans”, and the album’s title song. As Hyman stated;

“…a key line in the title song is ‘if I had a way to make time stand still’ and in many ways, it really describes our efforts to make music and keep this little band of ours alive all this time…”

After another European tour in 2007, The Hooters returned to their hometown of Philadelphia to play two shows at the Electric Factory during Thanksgiving week. As a teenage rock fan in the late 1960s, Bazilian would attend shows at this venue and take pictures of the bands to sell later, often back to the bands themselves. For the Hooters 2007 shows, the fans in attendance received a free advance copy of Time Stand Still, which was not officially released in the United States until February 5, 2008. Back at work in the Spring of 2008, the band again entered Elmstreet Studios to begin work on a new album, accompanied by violinist Ann Marie Calhoun. They recorded acoustic arrangements of 12 previously released songs and combined these with live material from the Electric Factory shows for the double-CD Both Sides Live, released in November 2008.

On October 23, 2009, in one of the last concerts at the historic Spectrum in Philadelphia, The Hooters played along with other local legends Todd Rundgren and Hall & Oates. 2010 saw the release of the EP Five By Five, currently the most recent release by the band. On April 30, 2013 the group’s 33 and 1/3rd anniversary, the Pennsylvania State Senate voted to declare it “Hooters Music Appreciation Day” in the state.

In 1985 at Kings College in Wilkes Barre, PA a young high-schooler trapped in the rural mountains had finally gotten to see the band she had become a fan of a few years earlier. She introduced her friends to their independent Amore album, but all of her “Hooter” experience was strictly of the vinyl variety up to that point. When the band hit the stage, there was instant energy and nothing ever hit her like the electrical charge of this band. The band worked so hard on that stage as if it were the most important show they ever performed. They didn’t stop moving, the timing and musicianship were outstanding and they looked like they were having as much fun as the audience. This was the magic of The Hooters.

More on The Hooters