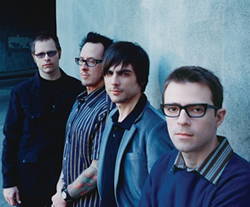 I think that Weezer is one of the last good bands still standing in todayâ€™s music industry. They have a very good sound to them yet they are original compared to what you normally hear on the radio these days. The band has been around since the early 1990s and are still kicking, producing the best music of their career. They started with their eponymous 1994 debut album, commonly known as â€œThe Blue albumâ€. This is, by far, their most popular and recognized album. But I believe there have been better ones. Their second album, Pinkerton wasn’t released until 2000/ Although not a commercial success at the time, this is a great album as well. Their most recent studio album is Hurley (which features a head shot of actor Jorge Garcia on the cover). The band covered new ground on this album by experimenting with the basics of raw rock energy, as compared to other recent releases.

For the Weezer novice, you may be familiar with songs such as “Pork and Beans” and “Beverly Hills”. While these are not terrible songs, Weezer has much better material out there and it is unfortunate, in my eyes, that these songs are the ones that have gained the most popularity. The band has changed members throughout the years (mainly bass players) but the constants has been front man Rivers Cuomo and guitarist Brian Bell.