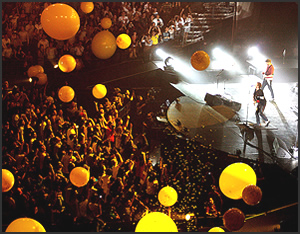 The British alternative pop band Coldplay has become one of the most popular acts in the world, a fame which they have now sustained for over a decade. The band’s sound has been compared to a vast range of musical artists from U2 to Radiohead to Echo and the Bunnymen. They have released five studio albums over the past dozen years, each receiving much critical acclaim, and their live shows have become legendary in their entertainment value.

The band’s front man, pianist, guitarist and vocalist Chris Martin formed the group in 1996 after he met guitarist Jonny Buckland at University College London. They enlisted the talents of classmate and bassist Guy Berryman and, after several name changes the band’s name and lineup were settled in 1997 with the addition of Will Champion on drums and percussion. The band decided to operate as a “democracy” with each member guaranteed an equal share of revenues and a pledge to only dismiss a member in the case of excessive substance abuse. There have been no personnel changes among this quartet in 15 years and counting. 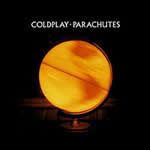 The band recorded a few EPs in the late 1990s before signing a five album deal with Parlophone in 1999. They recorded their debut album Parachutes with producer Ken Nelson. It was released in the U.K. on July 10, 2000 (12 years ago today) and the album spawned four international hit singles while reaching #1 on the British charts. The songs on the album show the band’s eclectic range of styles from the upbeat but ethereal opener â€œDonâ€™t Panicâ€ to the steady rocking radio hit “Yellow”. The acoustic driven “High Speed” is a travel song reminiscent of early David Bowie, with subtle but cool sound effects. The first single, “Shiver” fluctuates between a harder rocking motif to a more common ‘Coldplay form’. Many of the songs employ drumming and rhythm with stuttered beat, good guitar overtones, and vocals with range from ethereal to intense. 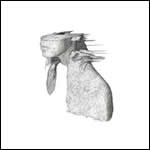 After the phenomenal success of the debut, the band returned to the studio with Nelson again at the helm to record A Rush of Blood To the Head. Released in 2002, the songwriting was affected by the September 11 attacks. The album continued the band’s commercial success and again topped the UK Album Charts, eventually going 9x platinum. The band wrote more than twenty songs for the album, eventually settling on eleven for the final release, which features tracks with extensive use of guitar and piano. The standouts on this album include “Clocks”, a repetitive but entertaining U2-ish track with a hypnotic piano and good backing rhythm, and “The Scientist”, a steady yet melancholy rock ballad that gradually builds throughout. There are also some very interesting tracks with varying sub-genres, such as the Indian influenced “Daylight”, the country/acoustic-flavored “Green Eyes” and the standard pop/rocker “In My Place”. 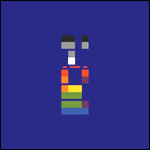 The band’s third album, X&Y was released with much anticipation in 2005. Featuring some elements of electronic music, the album was produced by Danton Supple and contains a hidden track (simply listed as “+” on the disc label) which was originally planned as a duet by Martin and the legendary Johnny Cash, prior to Cash’s death in 2003. Starting in January 2004, Coldplay spent eighteen months working on the album and was very judicious in selecting which tracks made the final cut. “Talk”, one of the album’s strongest tracks, is influenced by German electronic music guru Kraftwerk while “Speed of Sound” reverts back to the established Coldplay sound with a basic three-chord piano pattern and high-caliber rhythm and melody. “White Shadows” sounds like a cross between U2 and The Cure while â€œFix Youâ€ kicks off with a long, church organ backing of high-key vocals before finally kicking in fully about three minutes into the song. The album contains dramatic songs such as the bass-driven “Low” and the mellow piano song “What If” as well as some lighter, upbeat numbers like “The Hardest Part”. 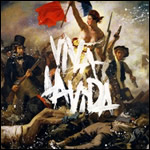 After years of extensive touring and recording, rumors spread in October 2006 that the band was taking a “five-year hiatus”. Although the band did admit they were taking a long break, they dismissed any suggestion that it would be anywhere near half a decade. In fact, the next month Coldplay began initial work on their next album and they were back on the road by March of the following year. The next album, Viva la Vida or Death and All His Friends was eventually released in June 2008. For this album, the band enlisted legendary producer Brian Eno and the band made a concerted effort to explore experimental styles, as Eno tried to make every song on the album sound differently. The lyrics were much more abstract and “visually oriented” then on previous efforts and Chris Martin made an effort to bring his vocal register down from falsetto, as is evident in songs such as “Yes”. The band also explored Hispanic influences and recorded portions of the album in Mexico and Spain. Still, the Latin music is just a small element of this album’s overall influences. “Lost!” is influenced by tribal music, the title track uses an orchestra, and “Lovers in Japan” features a honky-tonk piano. Lyrically, the album touches on varying themes such as war and revolutions, and macro problems of humanity. Just like their previous album, X&Y, there was a surplus of tracks from the Viva la Vida sessions, which the band opted to release as an EP titled Prospekt’s March later in 2008. 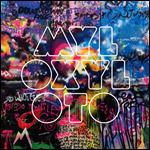 During the tour supporting Viva la Vida or Death and All His Friends, the band recorded material for a live album entitled LeftRightLeftRightLeft, released in May 2009. After another Latin American tour in 2010, the band recorded material for their fifth album. Released in October 2011, Mylo Xyloto is Coldplay’s most recent album (read a full review of Mylo Xyloto). Coldplay continues their strong streak of popular and critical acclaim as they continue through their second decade of international fame.

One thought on “Profile and History of Coldplay”